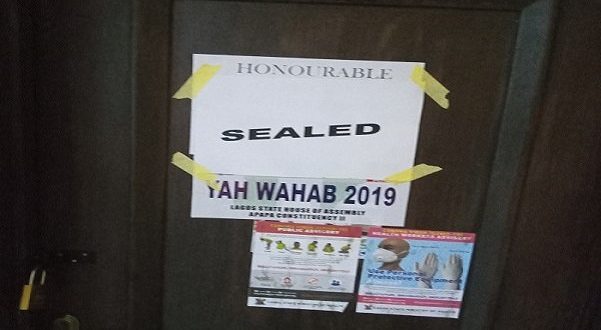 Principal officers sacked and suspended on Monday were denied entry into the Lagos Assembly complex on Tuesday.

Their staff were also denied entry into the Assembly premises while their offices have been sealed up with a notice ‘Sealed’, boldly placed on the door to their offices.

Security was also unusually tight at the two entrance into the Assembly.

Every vehicle and person coming were searched before entry.

Those who had no genuine reasons for coming were turned back at the gates.

Taking the action at plenary on Monday, Speaker Mudashiru Obasa said: “I hereby invoke Section 68 and Section 70 4 (a, b) 2 and 3 of the House rules in respect of gross misconduct, insurbodination and action that can destablise this House.”

Sources within the Assembly however gave three different reasons for the unexpected happening at plenary on Monday.

One source had it that the lawmakers were being suspected of having released recently the documents to a national daily with which it did a story on car purchases in the Assembly, which was considered embarrassing to the leadership.

Another alleged the lawmakers were the arrowheads of a plan to impeach the speaker, The Nation reports.

Another source hinted the lawmakers were being loyal to the former power broker in the House, who is now a Senator, Sikiru Osinowo, alias Pepper instead of loyalty to the Speaker.

One of the lawmakers affected said: “We don’t really know what our offense is, i think it is just power show.”.