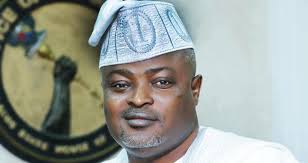 The Speaker of Lagos State House of Assembly, Mudashiru Obasa has commiserated with the People’s Democratic Party (PDP) over the death of some key members.

It will be recalled that the state Chairman, Michael Adegbola Dominic, passed away last week after an illness.

Obasa, in a statement on Sunday, charged party members to remain strong.

Obasa told them to solace in the fact that the departed chieftains played their roles for the growth of democracy in Lagos and Nigeria.

He noted that God gives and takes and prayed for His mercies at all times.

“As politicians, we also understand the roles we all play for the progress of our state or the nation.

“Irrespective of our political differences, we are, first, human beings with blood and water inside us.

“The least expected of us is to constantly show compassion, have human feelings and show love to one another”, Obasa added.

Previous: Insecurity: Gov Abiodun has admitted failure in Ogun State- PDP
Next: APC is nothing without President Buhari- Chieftain