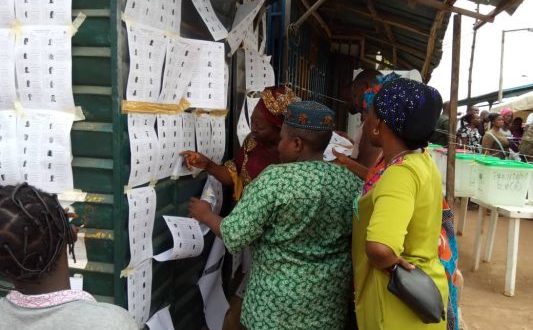 Some voters in Ajeromi-Ifelodun Federal Constituency, on Saturday descended on journalists in some polling units during the Lagos supplementary election shouting, “we don’t want media in this place.”

The supplementary election was conducted in 71 polling units across eight wards in the constituency following the inconclusive Feb. 23 House of Representatives election.

Some of its Correspondents were nearly beaten up at Polling Unit 002, Turner Street in Ward 10, Mosafejo area of the constituency.

“Don’t take our picture, we don’t want media. We will destroy your phone. We will punch out your eye,” the aggrieved voters shouted at the reporters.

The police officers on election duty at the unit had to tell the journalists to leave the centre.

Some elders at the unit also appealed to journalists to leave the area saying: “This place is delicate and very tensed”.

The journalists had to run for their lives by vacating the poling unit.

Meanwhile, Mr Ganiyu Balogun, the All Progressives Congress (APC) agent at the unit, said that the electoral offices and materials arrived early and voting commenced at exactly 8 a.m.

“There is no rancour, everything is peaceful because we are one. We are expecting a large turnout,” Balogun said.

Also, Mr Adekunle Adebayo, the Peoples Democratic Party (PDP) agent said, “There is no problem as at now, we are okay with the turnout.”

Voters’ turnout was impressive at PU 081 in Asibejo Street, PU 084 and 085 at Ashafa Street as well as PU 086 at Oguntokun Street, all in Ward 5, Tolu Area in Ajeromi- Ifelodun LGA.