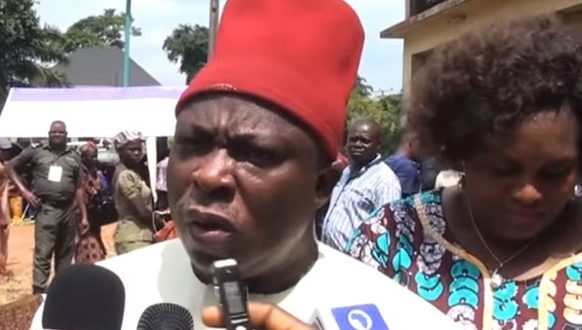 Anambra: Obiano would build on the success he has recorded – Umeh

A Former National Chairman of the All Progressives Grand Alliance (APGA), Victor Umeh, says his party’s victory at the Anambra governorship election has shown that Governor Willie Obiano has done well in his first term.

Umeh said this when he featured on a special edition of Sunday Politics on Channels TV hours after Obiano was declared the winner of the just concluded poll.

“It is for the people to judge the performance of their governor and whoever they have put in office to serve them,” he said.

“So, the statement made today is a very strong statement by the people of Anambra and it is an endorsement that Obiano has done well in the first term and they want him to continue for another term in office.

“I don’t think he neglected anybody in the first four years, anybody saying that is being economical with the truth otherwise he wouldn’t have won this election in this fashion – landslide across the entire street,” he added.

The APGA chieftain, who promised the people that the party would continue to deliver on its campaign promises, said Governor Obiano would build on the success he has recorded in Anambra.

Previous: Anambra: Obiano’s victory too clear to be contested or questioned – Okorocha
Next: Nobody has won 21 over 21, we scored 100%, it was a full endorsement – Obiano