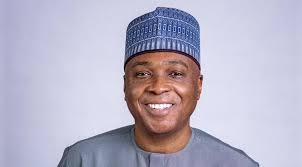 Former Governor of Kwara state,  Bukola Saraki, on Thursday, blamed the dwindling security of Nigeria which have led to wanton destruction of lives and property to leadership failure.

The Ex-President of the Senate, speaking in Jalingo, Taraba State while interacting with delegates and stakeholders of the state chapter of the Peoples Democratic Party (PDP), felt sad that Nigeria as a nation, has gone through so much.

He said, “We can not have the same type of leaders tomorrow as we have today. It is about the future of this country and our children. We need to do things differently.”

He added that he was surprised on why  the present leadership of the country under the ruling All Progressives Congress (APC) has not been able to addressed the predicaments bedeviling the country, the nation, in his view, needs a “competent” leader to rescue Nigeria.

He admitted that the country has been so divided, Nigerians, in his opinion, he believed “cannot afford to use sentiments to vote.”

While stressing that bad leadership is responsible for the present insecurity, he pleaded for all hands to be on deck in order to right the wrongs, soliciting that “We must do it right for the sake of those who died for no fault of theirs.”

Earlier, the state governor, Arc. Darius Dickson Ishaku, who also agreed with what Saraki said, lamented the present state to the country.

He admitted that “We need someone that will fix insecurity and bring investment.”

Saraki os one of the fifteen presidential aspirants jostling for the sole presidential ticket of the PDP for 2023 general elections.

Previous: You can’t use us to achieve political ambition- NBA hits back at Wike
Next: Incessant killings in Southern Kaduna may prevent indigenes from partaking in 2023 general elections- Group