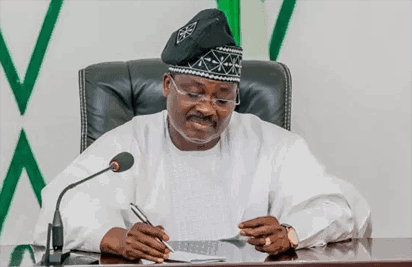 The All Progressives Congress (APC) has appointed ex-Governor of Oyo State Abiola Ajimobi, as its acting national chairman.

The statement was issued on Tuesday by  Lanre Issa-Onilu, its national publicity secretary, saying that this is as a result of the suspension of Adams Oshiomhole.

An appeal court in Abuja had upheld the suspension of Oshiomhole by a federal capital territory (FCT) high court pending the determination of the substantive suit.

On March 5, 2020, a high court sitting in FCT had given an order of interlocutory injunction restraining Oshiomhole from referring to himself as the APC national chairman, pending the determination of a suit filed by one Oluwale Afolabi.

Less than two weeks later, on March 16, a court of appeal sitting in Abuja had restrained the APC from executing the judgement of the FCT high court which ordered Oshiomhole’s suspension as national chairman of the ruling party.

There are reports that Ajimobi, who emerged deputy national chairman of the ruling party in March, is battling coronavirus.