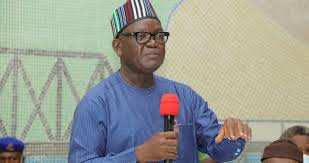 Let’s focus on how to destroy APC- Ortom tasks Atiku

The Governor of Benue State, Samuel Ortom has charged the former Vice President, Alhaji Atiku Abubakar and other leaders of the Peoples Democratic Party, PDP, to remain focused on moves to destroy the ruling All Progressives Congress, APC.

The statement was issued on his behalf  by his spokesman, Nathaniel Ikyur, while congratulating Atiku for clinching the presidential ticket of the main opposition party.

Ortom said Atiku’s victory at the PDP convention held on Saturday in Abuja was an act of God.

He described the primary election as peaceful, commending all aspirants, particularly the Rivers State Governor, Nyesom Wike and others who participated in the election.

He said, “In John 3.27, the Bible says ‘A man can receive nothing except it’s given to him from above.’ So, for the benefit of all Nigerians for whom we strive to make society better, let us now come together under the leadership of the party and be focused to dislodge the APC who have destroyed the very essence of our nationhood, by winning the 2023 general election to restore the dignity of Nigerians both at home and in the Diaspora.”

Ortom called on all patriotic members of the party to remain united in a bid to take over power in all levels of government via the 2023 general elections.

Previous: 2023 Presidency; Here is the latest development on APC screening exercise so far
Next: How Sen Teslim Folarin, others planned to assassinate me- Shina Peller