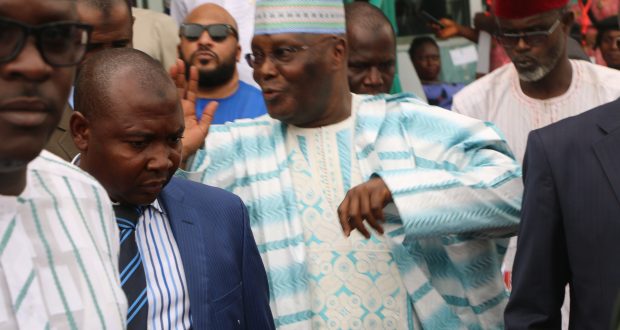 Former Vice-President, Atiku Abubakar has urged members of the Peoples Democratic Party (PDP) to vote out the All Progressives Congress (APC) led Administration by uniting with one another.

Atku stated this during his address at the ongoing National Elective Congress of the party at the Eagle Square, Abuja.

“We have made mistake, but we are human being. So, I am proud to return to the party we founded together in August 17, 1998 with Late Solomon Lar and Abubakar Rimi.”

Atiku also said that if the PDP was stronger together, Nigerians would be stronger, adding that the party must be one that embodied the Nigerian vision.

He called on the delegates to elect leaders who understood the urgency of restructuring and devolution of power, among other things.

“Let the PDP get winning again so that we can get Nigeria working again,’’ he stressed.

Abubakar also noted that it was critical for the party members to be united and secure the trust of Nigerians ahead of 2019 elections.

“It is great to be home and I believe in one Nigeria where all our people have equal opportunities and share a common goal.

“This belief stirred me and other compatriots to form the PDP; I am proud to say that I have returned home to our party, a party that gave the country the first successful transition,’’ he said.

The former vice president maintained that he had never abandoned the party`s principle, but had stayed through with it even while in the APC.

He said that he had always stood for constitutionalism and the enthronement of good governance in the country in the interest of all.

According to him, the APC which I was a member until recently, has not delivered on its campaign promises and has failed the country.

He said that PDP members and leaders must work to earn the trust of Nigerians again ahead of 2019 election.