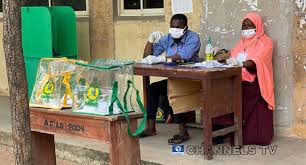 At the sitting, the panel barred newsmen from covering its proceedings, saying journalists were not allowed to do so.

Aggrieved candidates and their parties, including the NNPP, had approached the tribunal with various petitions to challenge the council polls held on July 24.

Recall that the ruling All Progressives Congress (APC) had cleared all the 20 local governments and the 236 wards, according to the Ogun State Independent Electoral Commission (OGSIEC).

The election, which suffered low turnout of voters, was condemned by political parties like the NNPP and the Action Alliance, saying it was marred with irregularities.

When the petition of NNPP was called on Wednesday, the party’s counsel, Monday Mawah, lamented that “OGSIEC has not filed a response to the petition.”

Mawah explained that the tribunal has adjourned the case till October 29 to allow the respondent reply the petition.

He noted, “For today, we are okay. Just as I made it known to the tribunal that there is no need for them to waste any time in responding.

“We expected that by the next date, they would have filed everything they need to file so that we will not waste any time when we are coming for the trial.”

Reacting, the OGSIEC lawyer, Adeola Olatoye promised to file all the necessary responses before the next adjourned date.

He added, “The tribunal gave us the whole week. Although I will advise us to be time conscious and to ensure a speedy trial of the petition. It has been adjourned so that we can do the needful. We have not filed our reply. So, we’ll do that before the next date, the 29th of October.

“Before then, we would have done the needful and we hope, very soon, the court will decide.”

Earlier, the Chairman of the tribunal, Rotimi Onafadeji, told journalists that recording or covering of the proceeding was not allowed.

He said, “Please, all pressmen that are here, there is no camera recording, audio recording, phone recording. Thank you.”

However, the NNPP lawyer disagreed with the Chairman, maintaining that the media is part of the system and must be allowed to cover the proceeding of the panel.

“The media is part of the system; they must be allowed to see what is going on. Because it is all about transparency. It is not all about justice, it must be justice that is seen to be done by the common man and not just we in the court. And how will the common man see it when the media is barred from covering proceeding. Daily Post reports.