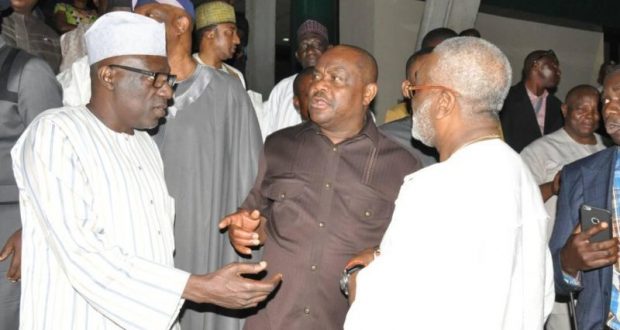 Lose or win: PDP Chairmanship aspirants agree to work together

Dokpesi  disclosed this in an interview with journalists after the PDP Governors Forum met with all aspirants in Enugu, which ended early hour of Monday.

Dokpesi disclosed that all the aspirants had agreed to sign the peace accord at the party’s National Secretariat, Wadata Plaza, Abuja, by 4 p.m.

He described the move as part of efforts by the aspirants to ensure that the party comes out of the Convention  stronger and united.

“With that accord being signed we are going to look forward to a very peaceful and harmonious convention.”

He said that while the party’s Presidential ticket was zoned to the North, the position of Chairman’s was zone to the South, without specific reference to  states or geopolitical region. He said that the candidates had agreed to work together

“After the zoning principle, all the aspirants have agreed to work together to come up with a common position. Anybody can contest.

“If the party in its wisdom and the aspirants agreed within themselves and notify the party early enough that would be fine.”

Also asked if the issue of a consensus candidate was deliberated at the meeting Dokpesi said “no, but that did not mean there were no discussion among the aspirants.

“Today on the way forward, a few of the aspirants met in the morning and in the afternoon and discussed which solution can be adopted.”

Dokpesi added that following the meeting, he would go ahead with his campaign and consultation to fulfill his ambition.

Ekiti Governor and Chairman of the Forum, Ayo Fayose, said the party National Convention, schedule for December 9, would be a world class  that other political parties would emulate.

Fayose said that the party had work hard and it has all it takes to win the Saturday Anambra Governorship election.

“We are using this opportunity to demand that the election should be credible. It should not only be credible but seen to be credible.

“We want to believe that Nigeria is of age to organise election that is acceptable at home and internationally, on November 18 in Anambra,” Fayose added

In attendance were the Chairman of the party’s National Caretaker Committee, Ahmed Makarfi, all the PDP governors, except Ebonyi represented by his deputy.

Previous: Vote and avoid state of emergency in Anambra, says Oduah
Next: We’ve uncovered plan by Lamido to destroy EFCC and Judiciary – Presidency