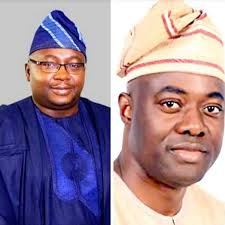 Adelabu had given a detailed assessment of Makinde’s performance, describing it as lack-lustre.

Instead of building on the legacies of his predecessor Abiola Ajimobi, Adelabu said Makinde has failed to maintain the standards he inherited but embarked on populist programmes that will not bring future benefits to the state as a whole.

He gave the assessment during his interview on Southwest Political Circuit, a popular programme on Ibadan-based Fresh FM 105.9.

Measuring performance indices in education, health, infrastructure, agriculture, security and good governance, Adelabu posited that Makinde has shown that he was ill-prepared for the position given his poor handling of the core areas of development in the last one year.

According to him, crime has increased since Ajimobi left, Makinde has not sustained or built on Ajimobi’s achievements in tourism; the Security Trust Fund has become dysfunctional; Ibadan is now dirtier than before; Makinde’s free education is not funded and his style of governance has not allowed the private sector to contribute to the development of the state, among others.

Adelabu specifically faulted Makinde’s handling of COVID-19. He said there was no empirical reason to support reopening of schools and worship centres this time. He described the decision as a deliberate move to endanger people’s lives.

The criticism immediately sent ripples down the entire political landscape of Oyo State with applause and condemnation from supporters of each gladiator.

In a statement by his Chief Press Secretary, Mr Taiwo Adisa, the Governor said no amount of “lies, misinformation and deliberate plots to malign the government by members of the opposition would make the people of the state regret electing Makinde as their governor.”

According to him, the governor remained committed to delivering on the mandate given to him by residents of the state, noting that the administration has been developing the state in accordance with the carefully-worded manifesto tagged Oyo State Roadmap for Accelerated Development, 2019-2023.

“The Makinde administration is surefootedly taking the people of Oyo State from poverty to prosperity despite intense efforts by APC chieftains to distract it,” the statement read.

The governor’s media aide added that the administration has also been transparent and open in the last one year and that this has continued to endeared it to the people, who have come to realise that indeed, good governance and probity were achievable in the state.

The statement also questioned Adelabu’s pedigree, especially his criticisms of Makinde’s handling of the COVID-19 pandemic, declaring that measures taken so far by the Oyo State Task Force on COVID-19 have been adopted even by the Presidential Task Force.