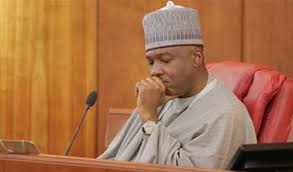 The former number three man made this remark in a statement on Sunday by  Head of his Media Office, Yusuph Olaniyonu.

He noted that nhe decision to include a provision in the proposed Electoral Act, which makes direct primaries compulsory for parties would only create new problem.

According to him, many of the political parties lack the necessary infrastructure to successfully conduct direct primaries at all levels.

He warned that the attempt would lead to litigations that might jeopardise the general election.

“I feel compelled to, once again, appeal to senators and members of the House of Representatives on the proposed Electoral Act because I realised that while the focus of the general public has been on how to get the electronic transmission of results into the proposed law, another potential problem that may clog our electoral process is included in the Electoral Act ­– provision on direct primaries.

“The two options on the table are to make direct primaries compulsory for all the parties or to leave it open for parties to decide. We should take the latter option. Let us leave each party to decide how it wants to source its candidates. Past experience shows that direct primary will lead to a crisis, if forced on the parties. We saw how people sent from the national headquarters to conduct primary elections stayed in hotel rooms and conjured up figures, which were announced as the result of direct primary elections,” he stated.

According to him, the direct primaries option will also put pressure on the Independent National Electoral Commission (INEC), whose officials must monitor all the primaries.

Saraki added: “The direct primaries provision may work for us in the future, but not now that we are not prepared for it, as the primaries may hold next June. That is just nine months from now. The time for adequate and necessary preparations towards direct primaries is even not there. There will be so many litigations arising from the process. Do we have the time to hold crisis-free primaries and not create booby-traps for the general elections?

“My appeal goes to all members of the National Assembly. Please, do not let us take a position on critical issues based on partisan and personal consideration. Let us put Nigeria first and act in the best interest of our country. During our time in the National Assembly, whenever we were confronted with issues like this, we just appealed and prevailed on members to put the nation first before any other consideration. I believe the same appeal should go to the present federal lawmakers