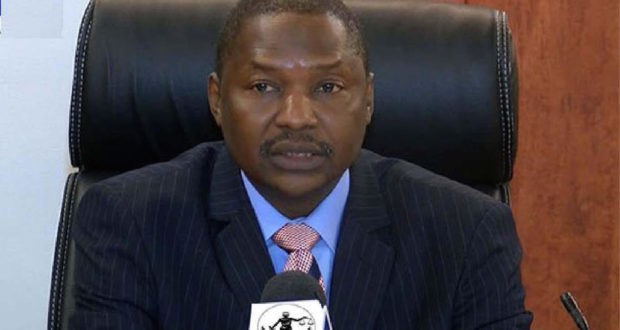 Attorney-General of the Federation and Minister of Justice, Abubakar Malami (SAN) has said that there is no plan to reduce the asset recovery powers of the Economic and Financial Crimes Commission (EFCC).

He said the anti-graft agencies would retain their powers to seize assets from corrupt suspects.

Malami made the clarifications in a statement through his Special Assistant on Media and Public Relations, Dr Umar Jibrilu Gwandu.

TheNation reports that Acting EFCC chairman Ibrahim Magu on Thursday claimed there was a plot to amend the agency’s enabling Act to reduce its powers.

He listed eight challenges facing the agency, including sponsorship of plot to amend the EFCC Act.

He said although some corrupt elements were behind the plot to whittle down the powers of EFCC as a way of fighting back, the commission will remain resolute.

He said the EFCC has secured 1, 684 convictions in the last four years with many assets recovered from corrupt elements.

He said asset recovery is key in denying the corrupt the enjoyment of the proceeds of their crimes.

Magu, who made his position known at Anti-corruption Townhall meeting in Abuja, said all that is needed to fight corruption is “a combination of guts, integrity and determination.”

He said: “For me, this is a moment to share experiences from my four-year tour of duty at the helm of the EFCC, leading the commission’s charge against all forms of corruption in Nigeria.

“It is true that corruption is the greatest problem holding back our country from fulfilling its potentials. It is entrenched in all sectors. But, in the last four years, the EFCC, backed by the political will of President Muhammadu Buhari, has, through a combination of enforcement and preventive measures, proving that this monster can be tamed.

“All that is needed is a combination of guts, integrity and determination.

“Fighting corruption comes with its peculiar challenges. The corrupt are not going to fold their hands while you retrieve what they had stolen. They would fight back. This has come in the form of:

•sponsored media attacks and even violent attacks against operatives of the Commission. My farmhouse in Nasarawa state was attacked;
•sponsorship of unwarranted amendment of EFCC laws, to reduce its powers and undermine the effectiveness of the agency; and
undermining and distracting the leadership of the commission.

The Acting EFCC chairman spoke on other inhibitions against the anti-graft war.

He said: “The other challenges are: not enough funding support for expanding activities of the commission, especially the huge cost of investigation and prosecution of cases.

“Lack of progress in some high profile corruption cases due to the antics of defence lawyers, especially some senior advocates.

“Lack of cooperation by some institutions in both public and private sectors that should be working side – by – side with the Commission in the fight against corruption.

“Lack of cooperation by some foreign countries in the recovery of stolen assets stashed abroad.

“I wish to reiterate that, no one agency can fight the ills of corruption alone, as such, we must all work together as hunters of fraud and corruption to salvage our country from the corrupt few.”

On the controversy surrounding the seizure of properties, Magu said: “Asset recovery is key in denying the corrupt the enjoyment of the proceeds of his/her crime.

“It also allows the country to channel recovered funds into national development. Within this period, the Commission has recovered several hundreds of billions of Naira which are in various categories of forfeitures.

“Some of these funds were recovered for third party individuals, companies, as well as government agencies such as NNPC, FIRs, AMCON and also state governments. Several thousand of movable and immovable properties have been recovered within the period. These are also subject of either interim or final forfeiture orders.”

Notwithstanding, Magu said the EFCC has secured 1, 684 convictions in the last four years with many assets recovered from corrupt elements.

He said: “EFCC does not stop at investigating high profile cases. It has also stepped hard on the pedal to bring several cases to conclusion in court, resulting in numerous convictions of fraudsters.

From January to October this year, the Commission recorded 890 convictions, a record unsurpassed by any agency anywhere in the world.

He listed other gains of the EFCC within his four-year stay in office.

He said: “Activities of the EFCC have helped to restore the confidence of international investors in our economy. The investigation of some controversial cases hitherto treated as off-limits, has erased the perception of Nigeria as a country that pays lip service to the rule of law.

“An example of such investigation is the one that is widely referred to as the Malabu oil scandal, where we have successfully brought charges against two former ministers for allegedly defrauding Nigeria to the tune of $1.2billion, regarding Oil Prospecting License (OPL) 245.

“There is also the $9.6billion Process and Industrial Developments (P&ID) Limited arbitral award against Nigeria by a UK commercial court. EFCC’s investigation and consequent arraignment of P&ID Limited and P&ID Nigeria Limited on charges of fraud and dealing in petroleum products without a license, led to the liquidation of the companies and the forfeiture of their properties to the federal government by order of the court.

“The investigation raises serious corporate governance issues in the purported gas processing and utilisation contract, which could assist Nigeria to navigate the legal land mines in the UK.”

Magu spoke on the arrest of the internet fraud suspect, Ismaila Mustapha(Mompha) and his Lebanese partner, Hamza Koudeih.

He added: “Also, the EFCC has consistently striven to alter the narratives about Nigeria being a country of fraudsters. This is manifest in our determined efforts to tackle the Internet and other forms of computer-based frauds.

“We record almost daily arrests and convictions of Internet fraudsters, but two major milestones were recorded recently. These are the arrest of Ismaila Mustapha, a social media celebrity popularly known as Mompha, and his Lebanese accomplice, Hamza Koudeih.

“Mompha was arrested on October 18 at the Nnamdi Azikiwe International Airport, Abuja, while he was on his way to Dubai, United Arab Emirate. Mompha’s arrest paved the way for the apprehension of Koudeih in his palatial Eko Atlantic Pearl Tower home in Victoria Island, Lagos, home.

“Upon his arrest, five wristwatches valued at over N60million were recovered from Mompha.