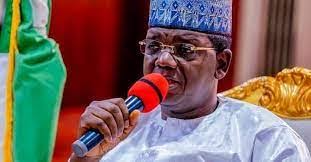 A lawmaker from Kogi State, Teejay Yusuf has knocked Governor Bello Matawalle for defecting to the All Progress.

According to him, Matawalle had been in secret alliance with APC for the past one year and four months before his defection.

He noted that his game plan was known by the People’s Democratic Party (PDP), hence they were not surprised.

Speaking in a statement in Abuja, he described the Zamfara Governor as a pawn who has made himself available on APC’s 2023 chessboard.

“Water will always find its level; it is sad that after being elevated into governorship, Mutawalle is now a mere pawn running helter-skelter in desperate pursuit of a return ticket he’s hardly qualified for with his very dim performance and the outrageous explosion of insecurity under his watch,” he said.

He wondered how such an unserious politician like Matawalle would be celebrated, noting that he has failed woefully as governor of the state in the last two years.

He added that PDP is not a desperate party looking for desperate politicians,

“After all the utopian promises of 2014, APC has foisted decadence in all sectors yet, you can see the number of governors and Federal officials who dropped their statutory responsibilities for a frivolous trip to welcome a thoroughly underwhelming performer”, he stated.