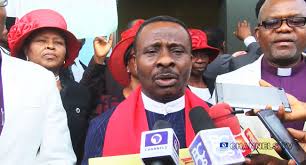 As mixed reactions continue to trail the choice of  Senator Kashim Shettima as Bola Tinubu’s running mate, the Christian Association of Nigeria has also reacted.

The Christian body said that it would not be moved or intimidated in its opposition to same faith ticket..

According to the Christian group, it would continue to maintain its stand in opposing Muslim-Muslim ticket saying that it would not cave in to any threat or intimation no matter how.

In an interview with newsmen, the CAN’s chairman, Kaduna State chapter, Rev. John Hayab, stated that they have placed all media spaces on red alert and they are waiting for order to kick start full reaction which nobody would stop.

“We were ready for this announcement. We have put some media outlets on notice. All we are waiting for is the right signal to give a full blown reaction.

“We’ll escalate this issue because our call for fairness and the balancing of the presidential ticket for the sake of justice, unity and fairness apparently fell on deaf ears.

“However, CAN is strongly determined to sacrifice everything to protect the interest of the Church in Nigeria. We will not be moved by any form of intimidation,” Hayab said.

Previous: Zulum to Tinubu: You are the next President by choosing Shettima as running mate
Next: Muslim-Muslim Ticket: It is dangerous to practice exclusionist politics at this period- Atiku