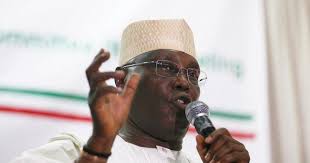 Muslim-Muslim Ticket: It is dangerous to practice exclusionist politics at this period- Atiku

The  former Vice President of Nigeria, Atiku Abubakar has released his opinion on the choice of Ibrahim Shettima as the running mate of APC presidential election, Bola Tinubu ahead of the 2023 general elections.

Atiku is currently the presidential candidate of the People’s Democratic Party PDP for the next year election.

POLITICO.NG had reported that the former Governor of Lagos State had on Sunday announced that he had chosen Shettima, a fellow Muslim as his running mate despite repeated outcry against same faith ticket.

Speaking on the development, the former number two citizen called on  Nigerians to shun ‘exclusionist politics’, at this particular period.

According to him, it would be dangerous for anybody to shun exclusionist politics, noting that the country needs to tread on the path of inclusive politics

He added that Nigeria has experienced darkest part of exclusionist politics in the past, warning that practicing such primordial politics is not suitable for this particular period.

Part of the statement read: “Politics is meant to be a corrective mechanism. So, even when we’re upset about the inexcusable low that the ruling All Progressives Congress (APC) has brought us in the past 7 years, we must ensure that we insulate our politics from the corrosive effect of the ruling party’s failures.”

According to him, it would be difficult for the country to move forward in the atmosphere of divisive politics.

“Dear friend and compatriot, the journey that we have signed on to undertake together is not one that we can accomplish by threading the inglorious path of exclusionist politics. This journey, our campaign, is a rescue mission this nation and it is a mission that must involve all Nigerians.

“So, while our opponents might think that there is an easy road to victory in divisive politics, we must get the message across to them that Nigeria has seen the worst shade of exclusionist politics and the road ahead is the path of inclusive and unifying politics. That is what we stand for,” he said.

Previous: Muslim-Muslim Ticket: CAN spits fire, says group can’t be intimated
Next: 2023: Tinubu settled for Muslim-Muslim ticket because opposition is not united- Activist