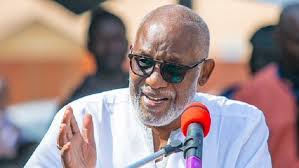 Muslim–Muslim Ticket not an issue we should be discussing- Akeredolu

Govermor Rotimi Akeredolu of Ondo has insisted that the next president of Nigeria must come from the South.

He made this statement on Wednesday night during an interview  on Channels Television’s Politics Today.

The Governor maintained that it is okay for him either Asiwaju Bola Tinubu (All Progressives Congress, APC) or Peter Obi (Labour Party, LP) emerges the next President.

Speaking on Muslim-Muslim ticket of the APC, Akeredolu insisted there were better issues to focus on.

“Religion is not the issue now. We have other issues that should be at the frontburner in this country. The issue of restructuring, rotational presidency, etc.

“Since 1999, there is an understanding that the presidency will be rotated between the North and South.

“So if today, we have people who want to deploy manipulation to think they can change it, then we should not accept.

“For me, it must come to the South,” Akeredolu said.

Previous: 2023: Those supporting Tinubu want to bring Buhari back – Group
Next: I agree with Tinubu on issue-based campaigns, says Peter Obi