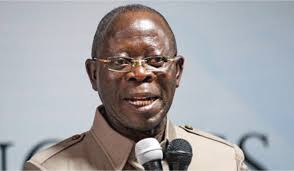 Former Chairman of the All Progressive Congress APC, Adams Oshiomhole has accused some Christians chieftains of opposing the presidential ambition of Bola Tinubu in the build-up to the 2023 election.

He said the criticisms against the party’s Muslim-Muslim ticket was uncalled for.

Speaking to newsmen in Abuja,  on Thursday, he said that the problems of Nigeria are bigger than disagreements over religion.

According to him,  the position of critics to the emergence of Senator Kaskim Shettima as Tiubu’s running mate is  mischievous

“Those leading the campaign in the APC family – if they were such believers in Christianity – had the opportunity to canvass for votes for one of the Christian candidates.

“But they were on record as having led the campaign on the side of Asiwaju Bola Tinubu, knowing very well that he is a Muslim,” he claimed..

“The issues we have to spend time discussing is what will any of the presidential candidates do differently, not what will a Christian or Muslim do,” he said.

He also faulted claims that Christians were being persecuted, noting that no evidence to back up the claim.

“I don’t think they bothered to show the evidence and yet we have not just a Christian Vice-President, we have a pastor, a senior advocate”, he stressed.

Previous: Senator to Lawan: You can’t stop us from impeaching Buhari
Next: Osun: Your decision to head to Tribunal s waste of Time- PDP tells APC