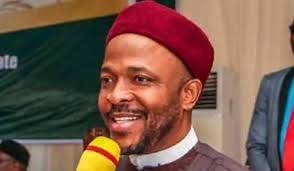 Minister for State for Education, has revealed that about 3,150 Nigerians contributed money for him to buy his N100 million All Progressives Congress (APC) presidential nomination form.

It will be recalled that Nwajiuba, left the Buhari administration on May 10 to join the presidential race,

Nwajiuba while speaking with newsmen in Abuja said that truly, Nigeria has monetized politics, noting that President Mohammadu Buhari is different.

“I am only presenting myself to serve, I am not sponsored by the oil industry, so the only people who can sponsor me are Nigerians. 3,150 people made contributions and we bought these forms.

“I have members of the House of Representatives from 1992 who endorsed me, even before they contributed money.

“Some have paid N1,000 each, one man from Nasarawa gave me 150 yams from his farm to sell, people are investing with hope that there may be a new Nigeria,” he said.

He said his aspiration was about Nigerians contributing to a future they wanted.

Speaking on the possiblity of the party coming up with a consensus candidate, Nwajiuba said he would abide by whatever decision the party took.

According to him,  the recent meeting of pesidential aspirants from the South-East failed to adopt a consensus candidate for the region.

“The South-East does not want to arrive at a consensus. South-East wants to work with Nigerians.

“We have only seven presidential aspirants from the South-East in the APC and that is very small, but I am sure out of this seven, we have those in their 70s and in their 60s.

“We have those in their 50s, we have every type you need. Nigeria must have the full breadth of Igbo diversity.

“Any type you need, Igbo people has it, so what we said yesterday was that anyone that is choosen, we are going to back him or her,”Nwajiuba said.

Previous: APC Primaries: Group raises alarm over alleged move to give ticket to Jonathan
Next: 2023 Presidency: Tinubu currently in distress, wants to be compensated- Okorocha