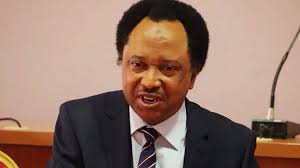 N100m Form: You are the roots of problems- Shehu Sani slams APC

A former Kaduna Senator, Shehu Sani,  has reacted to the amount for the presidential nomination forms of the ruling All Progressives Congress, APC.

It will be recalled that the ruling party had earlier announced that aspirants seeking to contest for the 2023 presidency would pay N100m to buy forms.

The APC on Wednesday said aspirants for senatorial positions would pay N20 million for the forms while those for the House of Representatives would pay N10 million.

The party’s NEC had also approved May 30 and June 1, for its special convention for the 2023 presidential primary election and May 18 for its governorship primaries.

Reacting, Shehu Sani in a tweet on Wednesday said money is the root of all problems.

The former Kaduna Central Senator wrote, ”When you ask politicians why the nomination form is so expensive, they will say it’s to “drive away unserious ones”. Their prerequisite for “serious leadership aspirations” is money, That is the root of all problems.”