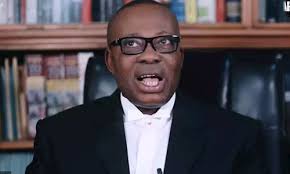 Ex-2nd Vice Chairman of the Nigeria Bar Association (NBA),Monday Ubani, has lashed out at  members of the National Assembly for rejecting the electronic transmission of election results.

According to him, the  lawmakers exhibited legislative rascality in their actions, saying that electoral process needed the involvement of technologies to achieve transparent

According to him, the Independent National Electoral Commission (INEC) must be given a fair l framework to carry out their constitutional duties of conducting elections in Nigeria.

He claimed that the National Assembly violated the constitution of the land which they swore to uphold,.

In an interview with an online Daily Post, he said , “the present manipulative treachery to keep us stranded as a nation in our electoral improvements will be resisted with our last strength and we have the final hope placed on the third arm of the government( the judiciary) should these set of legislators persist in their doomed journey of interfering on our progressive electoral journey as a nation”.

“It is shameful that Nigeria with her size, resources and sophistication are even starting late on this, because other nations smaller in size, resource, sophistication have deployed this system years ago and here we are in the year 2021 debating whether we should deploy technology in the transmission of our electoral results.

“I feel humiliated by such a scenario playing out in the hallowed chambers of our national assembly. Who does that, if I may ask. The macabre dance over this started in the National Assembly with confirmed allegation that the Bill which passed third reading under the chairmanship of Senator Kabiru Gaya of INEC Committee has been altered to block electronic transfer of election results.

Continuing, he added, “the situation in the House of Representatives was not different but more dramatic as the man who presided over the plenary did not hide his disdain to observance of the very rules that guide proceedings in the House. The Deputy Speaker, Hon Ahmed Wase to say the least is a big minus to democracy who does not believe in adherence to rules and procedures of the House. It is more shocking and depressing to see those who claim to be lawyers running around all over the place to defend the absurd illegality. Who did this to us as a nation? How did we get here, many are asking.

“Prior to now, INEC without any legislative backing have successfully conducted elections with card readers and have transmitted results electronically in several constituencies in Nigeria without any of these “alarmist drawbacks” being trumpeted by these backward-thinking legislators that voted for that provocative amendment. Why are these sets of legislators in the 9th Assembly trying to set the hand of our clock backwards? What has come over them, “the lawyer querie