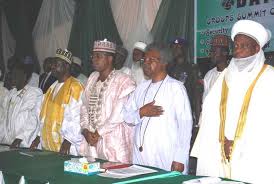 The Northern Elders Forum has said that it regrets supporting  Muhammadu Buhari in the 2015 presidential election, instead of Goodluck Jonathan

The group added that Buhari has disappointed a majority of Nigerians who trusted in his leadership prior to 2015 polls.

According to the NEF’s Director of Publicity and Advocacy, Dr. Hakeem Baba-Ahmed, the forum wants the next president of Nigeria to be one who would act in the “opposite direction” of the incumbent Nigerian leader.

Speaking on Arise TV’s ‘The Morning Show’ breakfast programme monitored by The Guardian, Baba-Ahmed said: “Is there any Nigerian who is not disappointed in President Buhari including diehard APC people? Is there anybody who would not tell you he wished President Buhari had done much better?

“We raised huge expectations, we told people, ‘Get rid of Jonathan, put Buhari there, he would fix corruption, he would fix insecurity, he would fix the economy’ (but) look at where we are now.

He added that what they need now is to get ready to elect another President who would go in the opposite direction.

According to him Nigeria needs a  President who has a vision and a clear idea of what governance involves rather than just being a President.

“So, I am disappointed and that is why today, I am actively involved in trying to see that a new leader emerges in getting Nigerians a new lease of life,” added Baba-Ahmed whose group, it’d be recalled, called for the resignation of Buhari in December 2020,” he added.

However, Baba-Ahmed is of the opinion that the Southern governors should not make the 2023 presidency a matter of disagreement amongst Nigerians, noting that they should instead negotiate as the North had lived under Southern Presidents — Olusegun Obasanjo and Jonathan — since Nigeria’s return to democratic rule in 1999.

“We have lived under Southern presidents because we recognise that Nigeria is made up of sections, ethnic groups and interests. We recognise that, we are northerners, pluralism is in our DNA, we accept that, we live with it,” he said.

“Don’t make the issue of presidency a matter over which Nigerians would fight and threaten the country and the democratic process, that is very dangerous for this country,” the NEF spoke