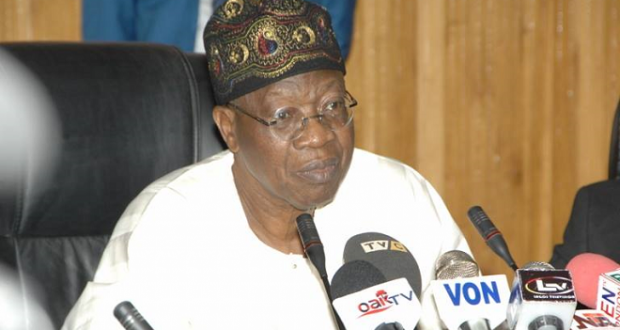 The Federal Government says it is succeeding in cleaning up the rots, looting, impunity and plundering of the nation’s economy, perpetrated by the Peoples Democratic Party (PDP).

The Minister of Information and Culture, Lai Mohammed, who stated this on Sunday in Lagos at a media briefing, said the task was tough, but the government was determined and succeeding.

He said the government has been working round the clock to take Nigeria out of the “hell hole the PDP dumped the nation and it will be a tragedy if the party is ever allowed to come back to power in 2019”.

Mohammed said that the President Muhammadu Buhari’s Administration had made tremendous progress in the fight against corruption, insecurity and in revamping the economy.

Specifically, the Minister said that with the enforcement of Treasury Single Account (TSA) policy, N3 trillion had accrued to government purse.

He said the government had successfully removed the N108 billion in maintenance fees payable to banks, pre-TSA and monthly saving of N24.7 billion.

The Minister said that N120 billion had also been saved with the elimination of thousands of ghost workers in the system.

He stressed that nothing showed rot of the PDP more than the level of corruption which the President Muhammad Buhari Administration inherited.

“Where do we start? Do we want a Diezani back as Petroleum Minister, after the recovery of at least 43 million dollars and 56 houses from this one person?

“Do we want the 2.9 billion dollars that has been successfully traced and recovered from looters by the EFCC since the inauguration of the present Administration, to be re-looted?

“What about the 151 million dollars and N8 billion in looted funds that have been recovered from just three sources as a direct result of the introduction of the whistle-blower policy?” he said

Mohammed said that under the PDP, the Joint Admission and Matriculation Board (JAMB), only remitted an aggregate of N51 million, whereas in September 2017, the same JAMB announced it was ready to remit N7.8 billion.

“As the pace of politics gradually picks up ahead of 2019, it is important that we let Nigerians know the enormous progress that the Buhari Administration has made in just a little over two years.

“It is a mark of the contempt in which the PDP holds Nigerians that the party is even talking of returning to power, even when the rot it left behind is yet to be totally cleared.

“Never again must Nigeria be bedeviled by a rapacious, impunity-prone and plunder party like the PDP,” he said.

Mohammed reiterated the commitment of the government to ensuring that those who plundered the nation’s treasury would face the music.