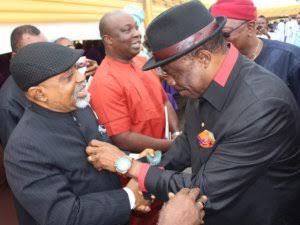 Ngige to Obiano: The only achievements you have recorded in Anambra is huge debts

Minister of Labour and Employment Chris Ngige has passed a vote of no confidence on Anambra State Governor, Willie Obiano,

Acccording to the medical doctor turned politician, Obiano as taken the state 20 years backwards, adding that the has performed very poorly.

Ngige said that the degree of stagnation, underdevelopment and retrogression that they state is facing under Obiano is alarming.

Speaking through his media office, Ngige accused Obiano of wasting the opportunity given to him as a governor after inheriting having inherited a robust economy from him

Ngige claimed further hat Governor Obiano has failed woefully in his responsibilities to the people of the state.

The statement said: “This governor has taken Anambra State 20 years backwards, making the citizens wish the hand of the clock could be turned back. The stagnation, depreciation and retrogression are mindboggling. What a wasted opportunity for a Governor who inherited virile and robust state resources.

“The eventful era of Ngige has remained a parameter for judging successive administrations in Anambra State, going by his unprecedented achievements and quantum of projects executed by his administration in just three years.

“It is important to remind James Eze, who authored the diatribe, that Ngige took over power at a critical stage in the history of Anambra state, with years of salary and pension arrears, dilapidated infrastructure and mounting debts owed to banks and international lenders, yet, Ngige did not sell off state assets to take off.

“Ngige neither received a formal handover note, nor inherited N75 billion in local and foreign currencies from his predecessor. Indeed he inherited Anambra in a state of anomie. Yet, he not only liberated the state but left it at an enviable height.

“Ngige inherited neither gold nor silver and therefore did not have any to squander. There was no promissory note, running into billions of naira to sell prematurely or valued state assets to auction off, to fund squandermania.”

The statement noted that Ngige administration engineered an armada of road construction, which unfortunately are the only motorable roads in the state today, while those constructed by the incumbent administration have all collapsed.

“Still standing like the rock of Gibraltar are 105 road projects, cutting across the three senatorial zones of Anambra State, transversing six local government areas each and connecting neighbouring states of Abia, Imo, Enugu, Delta and Rivers.

“Through the Governor’s Executive Order, he brought the payment of salaries and pensions to first line charge, ensuring that till today, civil servants and pensioners are paid as at when due.

“He liquidated debts which the state government owed banks and international lenders and cleared the backlog of salaries and pensions he inherited from the previous government.

“He recalibrated pensions, hence Anambra State became the second state in Nigeria to pay 143 percent increment after Rivers State. Thus pensioners, who were hitherto earning N8000, started receiving N22, 000 as and when due while some arrears liquidation started.

“He also laid a solid foundation for quality education by doing the groundwork and taking the first major step in returning 51 primary and 13 secondary schools to the missions in 2005. He renovated all the schools and paid UBEC counterpart fund of N1.6 billion, winning the UBEC laurel as the second best state in 2004, 2005 and 2006.The remaining schools were to be handed over in November 2006 but for his exit from office.”

“He further built infrastructures at the state university and decentralized it into a multi-campus system, securing accreditation for 32 courses including Law, Engineering and Medicine in 2005.

“He revived the Onitsha and Awka township water schemes and Anambrarians enjoyed pipe-borne water in these two cities until he exited office in 2006. All have collapsed under the APGA government of Willie Obiano.

“In agriculture, he mapped out the agricultural zones in Anyamelum towns of Omor, Ifite Ogwari and Ogboji in Aguata LGA of the State.

“Ngige ended the infamous 18-month strike by doctors in the state and partnered international donor agencies, to revolutionalise healthcare delivery in the state,” the statement added.