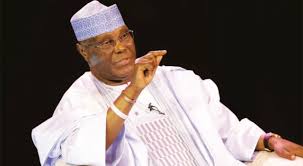 Former Vice President of Nigeria, Atiku Abubakar has said that it would be difficult for Nigeria to overcome its current challenges without restructuring.

The presidential candidate of the Peoples Democratic Party (PDP) made this remark at the 64th Annual Bible Study Conference of the National Council of Anglican Youth Fellowship (AYF) of Nigeria held at the Ekiti Diocesan Camp Ground, Iyin-Ekiti, Ekiti State.

It was gathered that the Turaki of Adamawa was represented by his running mate and Governor of Delta, Senator Ifeanyi Okowa,

According to Atiku, Nigeria seriously needs  knowledgeable, honest and  experienced leaders who would take Nigeria to higher heights.

He added that  that devolution of powers and resources to the sub-national governments is greatly needed for a better federal structure.

“I advocate a proper federal structure that recognises the federating units and the federal government as mutually coordinate and not subordinate one to the other, yet cooperative among themselves, distinct from the current structure where states exist as mere appendages of the centre.

“I am particularly thrilled by the theme of this conference – ‘Be Strong and Courageous’ because the times we live in call for men and women of courage who will stand up to be counted in the battle to rescue and rebuild Nigeria.

“There is no gainsaying the fact that Nigeria’s unity is under serious threat today. The mutual suspicion, distrust, and sometimes hostility among the various ethnic groups have reached levels never experienced before, fueling separatist agitations across the country.

“This is largely due to the general discontent occasioned by the broken promises, dashed aspirations, and the lopsidedness in power-sharing under the current federal government.

“As I said sometime ago, a situation where the top guns in the nation’s security architecture are dominated by persons from a particular ethnic/religious group does not augur well for the unity and progress of the country.

“Nigeria can only grow if ethnic, religious and tribal divides dissolve, and a pan-Nigeria goal is truly desired and embraced by all. We must act swiftly – and decisively – to calm the raging storm, regain confidence in the Nigerian project, and halt the drift toward chaos and anarchy.

“The forthcoming 2023 elections offer us the opportunity to do the needful and move Nigeria in the right direction. It calls for sober reflection and strategic thinking as against the mindless euphoria, sensationalism, and herd mentality that brought us to where we are today.

“Going forward, we need mature, wise, and experienced leaders who will inspire hope in our country and foster a sense of belonging among all Nigerians.

“I am an ardent believer in the restructuring of Nigeria, especially as it relates to fiscal federalism and devolution of powers.

“Restructuring does not mean we jettison the federal system of government. In fact, I believe that it is more functional and realistic for our ethnic, linguistic, religious, and cultural diversities.

“I guarantee you that the states and Nigeria will develop faster when the proper federal structure is put in place.”

He added that if he wins 2023 presidential election, he would give priority to education, saying that  no nation could develop without giving knowledge to people