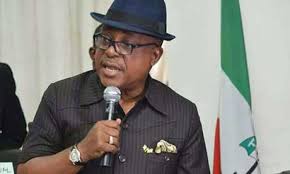 Nobody is plotting to remove me as PDP Chairman- Secondus

National Chairman, Peoples Democratic Party (PDP), Uche Secondus, has dismissed the report making the rounds that there is plot to  remove him from office before the expiration of his tenure on December 10.

While reacting to the report in  in a statement by his media aide, Ike Abonyi, Secondus said contrary to allegations that he is not piloting the party well, his eadership in the last three years has increased the number of PDP-controlled states from 11 to 16.

According to him,  the National Executive Committee (NEC) recently praised the National Working Committee (NWC) for being the first in recent times to “render full account of the party’s finances and for the timely submission of audited account to the Independent National Electoral Commission (INEC).”

He also debunked the rumour that that leaders of the party, in the South South, were planning to replace him, saying that no meeting of the caucus was held to discuss that.

“Aside delivering internal democracy, which it promised the party when it got the mandate in 2017, Secondus’ leadership has also grown the party to control 16 from 11 states when it took over.

“In addition, Chairman of PDP Governors’ Forum, Aminu Tambuwal of Sokoto State is working closely with the Secondus-led NWC in all ramifications to grow and strengthen the party,” he said.