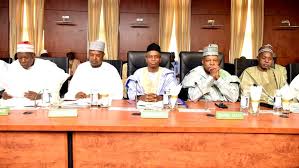 The development is in line with the resolution of the governors to back a southern candidate as the flagbearer of the APC for the 2023 general elections.

The Chairman of the Northern Governors Forum and Governor of Plateau State, Simon Lalong, who spoke on this said those whose names were submitted had been graded by the party screening committee based on specified metrics.

Lalong said since the Northern Governors is only one section of the party, the shortlist will not bar other aspirants from contesting the primaries.

It would be recalled that the governors had, on Monday, met with Buhari to officially inform him of their stance to zone the ticket to the south.

The meeting after the National Chairman of the APC, Senator Abdullahi Adamu announced that President Buhari had endorsed Senate President Ahmed Lawan as the consensus candidate.

The Presidency however immediately denied the announcement, saying that Buhari, at the time, had not anointed any candidate.