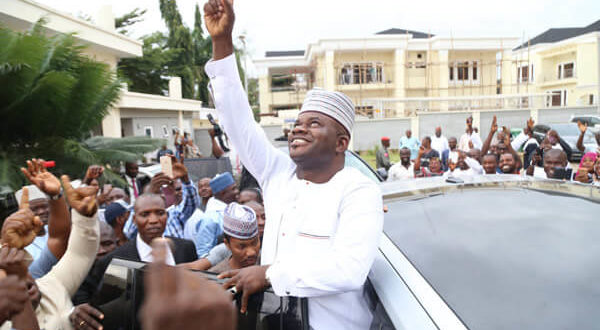 Nov 16 Poll: Gov Bello promises to give Kogi a facelift if re-elected

Gov. Yahaya Bello of Kogi, the All Progressives Congress (APC) candidate in the Nov. 16, governorship election, has given assurance to the people of the state of his commitment to transform the state for the betterment of all, if re-elected.

Bello made the promise at Isanlu, headquarters of Yagba East Local Government Area on Thursday, while on campaign to woo votes from the people of the area.

He also pleadged that if given the mandate again, his administration would touch every sector of the state’s economy by embarking on massive infrastructure development, to give the people a new lease of life.

The governor assured that he would not fail the people, adding that what the Kogi needed was continuous peace, good governance, education and citizens with good health.

He noted that those were the key elements that defined democracy, saying that APC would never practice discriminatory politics.

The APC candidate said Kabba-Ayetoro-Gbede-Islanlu-Egbe-Ilorin Road project would be completed to ease the plight of motorists plying the road.

He told the people that Sen. Smart Adeyemi, during the last administration, facilitated its rehabilitation.

Bello,who noted that the road project was abandoned when Adeyemi left the Senate, urged the people of Kogi West to return Adeyemi to the Senate, to enable him push for the completion of the road and more dividends of democracy.

The governor also noted that the completion of Ajaokuta Steel Complex would go a long way in creating jobs for the people of the state and commended the efforts of President Muhammadu Buhari in that direction.

“We are going to execute developmental projects that will impact positively on the lives of the people, if we are given the mandate again.

“We will also focus on youth employment and job creation to secure the future of our youth,” he said.

Bello further urged the people of Kogi West to let their support for APC translate to massive votes for the party and Senator Smart Adeyemi on Nov. 16.

“Don’t throw away your votes. Give the votes to Adeyemi, he will represent you at the Senate effectively. If you love me and will cast your vote for me, do the same for Adeyemi.”

He said that with the commencement of prompt payment of s state workers’ salary, his government had also commenced the repositioning of the state for the better.

Earlier, Adeyemi, who is also the Director-General, Bello/Onoja Campaign Council, said the senatorial district was ready to reward the governor with their votes for his “love for the zone.”

Dignitaries present at the APC campaign rally include former Acting Governor of Kogi , Chief Clarence Olafemi and Jide Omokere, an oil magnate who defected from PDP to APC with hundreds of his supporters at the occasion.