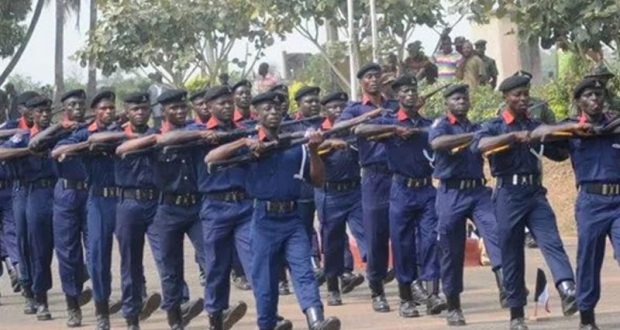 More security are being deployed to Anambra for the governorship election this coming weekend.

The Nigeria Security and Civil Defence Corps (NSCDC) intends to deploy 11, 000 personnel and 30 special duty dogs for the conduct of the November18 election in the state.

The Commandant of the NSCDC in Anambra, John Ahwen, made this known in Awka on Tuesday.

He said that the team approved by the Commandant-General of NSCDC, to be led by Hilary Madu, the NSCDC Deputy Commandant-General, Operations, and other top officers, would man each of the 21 local government areas of the state.

Ahwen said that one or two personnel of the NSCDC would be in each of the 4,608 Independent National Electoral Commission (INEC) polling units across the state.

Ahwen explained that the personnel would be selected from Abia, Imo, Enugu, Ebonyi, Anambra, Delta, Benue and Edo.

He said the NSCDC would equally deploy 115 vehicles, 15 boats, drones, and ambulances.

Ahwen said that 15 boats of the NSCDC would support those being deployed in the riverine communities by the Nigerian Navy.

According to him, the involvement of security in the election is for the good of the people of Anambra.

“No security personnel deployed for the conduct of the November18 governorship election has the power to arrest anybody except on the directive of the INEC electoral officer.

“Our mandate is to stand and watch and see that things move on well, ‘’ he said.

“The Anambra people should be rest assured that the security personnel being deployed for the November18 election are participating for good.

“They will neither molest anybody nor interfere with the smooth conduct of the election,’’ he said.

The Nigeria Police Force had announced plans to deploy 28, 000 personnel while the Federal Road Safety Commission will assign 2,000 personnel.

Other security agencies have yet to present the number of their personnel that would be involved in the election.