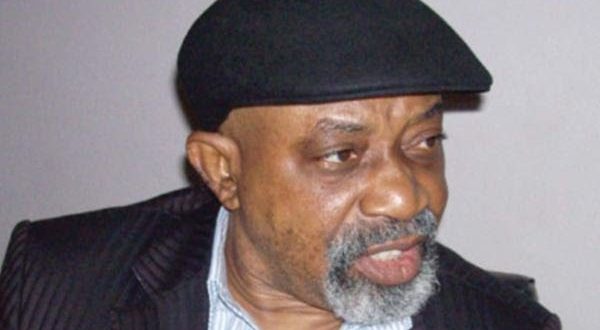 The Presidency says Mr Austin Enejamo-Isire is the authentic Chairman of the Board of Directors, Nigeria Social Insurance Trust Fund (NSITF), and will be inaugurated at Banquet Hall of the Presidential Villa, Abuja, on Monday.

The Organised Labour under the leadership of Ayuba Wabba had allegedly accused the Minister of Labour and Employment, Dr Chris Ngige of replacing the name of Comrade Frank Kokori with his kinsman Enejamo-Isire as chairman of board of the NSITF.

The picketing of the minister’s residence by the labour using two petroleum tankers to block the entrance and exit points of the house had resulted to violent clashes between people suspected to be the minister’s loyalists and the affected labour officials.

The labour, who vowed to ensure the inauguration of Kokori as NSITF chairman, had called for international labour actions against the minister over the incident.

However, a statement by Mr Femi Adesina, the Special Adviser to the President on Media and Publicity, in Abuja on Sunday, expressed regret over the misunderstanding between the labour and the minister on the matter.

The statement read in parts: “Following the disagreement between the Federal Ministry of Labour and Employment and the leadership of the Nigerian Labour Congress (NLC) over the appointment of the Chairman of the board of the Nigeria Social Insurance Trust Fund (NSITF), the Presidency wishes to clarify as follows:

“A. That the NSITF is a hundred percent, Federal Government of Nigeria owned insurance parastatal, under the supervision of the Federal Ministry of Labour and Employment, designed for the role of insuring workers (employees) in the public and private sectors.

“The organization is empowered by law to implement the Employee Compensation Act (ECA) 2010 with mandate to insure workers and pay them compensation for accidents, deaths and injuries in the course of work.

“The NSITF was bedevilled and riddled with corruption between 2012 – 2015, which resulted in a colossal loss and mismanagement of about N48 billion out of the total N62 billion contributions during the said period.

“These were contributions by the Employers – viz government and the private sector for payment of compensation to workers and even to Employers for loss of man-hours by their workers.

“This fraud has been investigated by the Economic and Financial Crimes Commission (EFCC) and the last Chairman and some members of the former board and some officials of the NSITF are presently being prosecuted by the EFCC.

“The appointment of the Chairman of this board, which is in consonance with Sec. 4(a) of the NSITF Act CAP N88 of 2004 was also approved by Mr President since 23rd July, 2018 on the recommendation of the Hon. Minister.

“Also approved by Mr. President were the Managing Director and three Executive Directors who had assumed duties since 18 April 2017.’’

The approval also included a member each to represent the Central Bank of Nigeria and the Federal Ministry of Labour and Employment.

“Members of this board are to be formally inaugurated at 9 a.m. on Monday, May 13, 2019 by the Hon. Minister of Labour and Employment at the Banquet Hall of the Presidential Villa, Aso Rock, Abuja,’’ it further stated.

According to the presidency, Frank Kokori has also been appointed on the recommendation of the Minister of Labour and Employment to chair the board of Michael Imoudu National Institute for Labour Studies (MINILS), a diploma awarding labour institution.

It said: “Comrade Frank Kokori , our respected veteran labour leader has Mr. President’s immense respect and has also been appointed on the recommendation of the Hon. Minister of Labour and Employment to chair the board of Michael Imoudu National Institute for Labour Studies (MINILS), a diploma awarding labour institution.’’

The Presidency noted with deep concern and regrets, the events that culminated in a skirmish at the private residence of the Minister of Labour and Employment, and condemned it, in its entirety.

“However, in the spirit of reconciliation, the Presidency appeals for calm from the NLC and the Ministry of Labour and Employment officials.

“There are ongoing efforts to reconcile the NLC leadership with the Ministry of Labour and Employment, led by their Minister who has doggedly been fighting the cause of Nigerian workers whenever their issue is discussed by government, the latest being the enactment of the new National Minimum Wage Act 2019, the statement maintained.