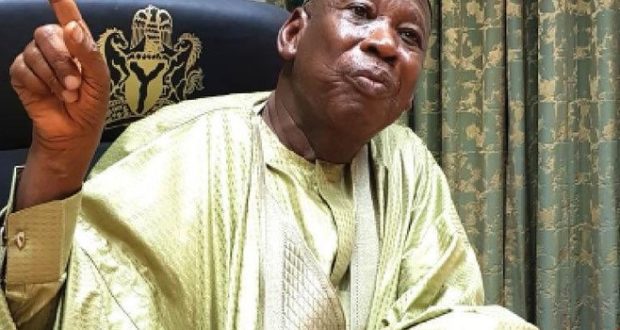 Obaseki will not escape disgrace, he will be shocked- Ganduje

Kano Governor, Abdullahi Ganduje has said nothing will prevent the All Progressives Congress (APC) from winning the upcoming governorship election in Edo State.

He added that his defection to Peoples Democratic Party will not prevent governor Obaseki from political disgrace.

According to him, Governor Godwin Obaseki has not done much to deserve a second term, stating he will be beaten flat by the APC candidate, Osagie Ize-Iyamu, a pastor.

Ganduje, who is the Chairman of the Edo State Gubernatorial Campaign Council for APC, said Obaseki has too many hurdles that he cannot cross to victory.

He added that Obaseki’s newly found platform -the Peoples Democratic Party (PDP) cannot rescue him from disgrace either.

“Obaseki has failed to deliver to his people. He would be shocked at the polls,” Ganduje said.

The Kano Governor noted: “The art of governance is to provide social and economic development, infrastructural facilities, peace and stability.

“But all of these are lacking in Edo State under Mr Obaseki.

“What has he put on ground to show to Edo people that he deserves re-election?

“He has 53 cases in court and is busy fighting with his people.

“Apart from these litigations, he just cross carpeted to another political party and abandoned the governance of his people. How can he be returned?”

Ganduje said Osagie Ize-Iyamu is a man of God, whose commitment in the service of his people, made it deserving for all his people to follow him to APC.

“Osagie Ize-Iyamu has his people at heart. Obaseki does not. When Ize-Iyamu joined our party he came with all his people.

“But when Governor Obaseki crossed over to PDP, he was followed only by his cabinet members. This is because the people did not see any reason why they would follow him,” the Kano governor said.

Ganduje, in a statement signed by his Chief Press Secretary (CPS) Abba Anwar, assured that the APC would play the electoral game in Edo in total compliance with the rules of the game -the Electoral Act.