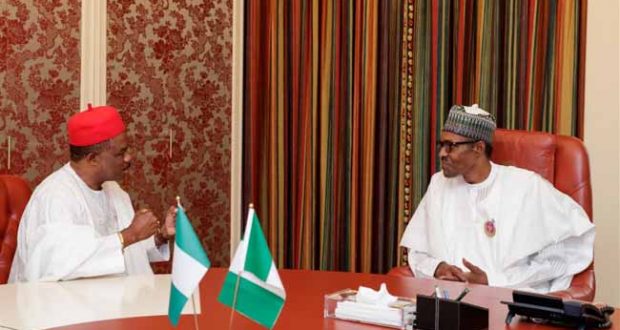 Newly sworn in Zimbabwe's president Emmerson Mnangagwa (C) walks after taking the oath of office at the national sports stadium on the outskirts of Harare, on November 24, 2017 during the Inauguration ceremony. Emmerson Mnangagwa was sworn in as Zimbabwe's president on November 24, marking the final chapter of a political drama that toppled his predecessor Robert Mugabe after a military takeover. / AFP PHOTO / Marco Longari

Obiano pays Buhari a thank you visit, says he will never dump APGA for APC

He made this known while addressing journalists when he paid a thank you visit to President Muhammadu Buhari at the State House, Abuja.

He also mentioned that he was not worried about the exit of Odumegu Ojukwu’s son from his party, the All Progressives Grand Alliance (APGA).

Rather than focusing on such issues, Obiano said he was more interested in delivering on his campaign promises.

He, however, thanked the President for allowing a free and fair election during the Anambra governorship election.

Obiano who won by a landslide victory promised to work in order to justify the confidence of the people of Anambra.

Previous: Ortom doesn’t deserve a comeback because our people are dying of hunger – Group
Next: Come back home to the PDP, Fani-Kayode, Murray-Bruce, Secondus beg Atiku