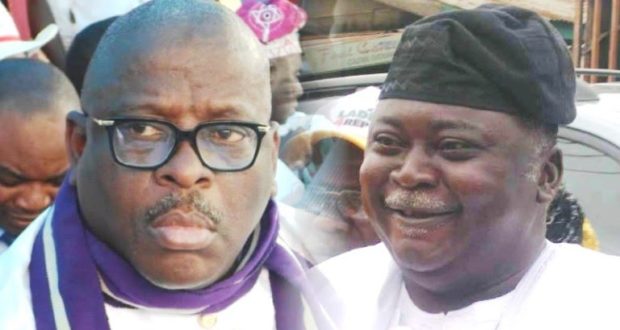 The new chairman of the Ogun State chapter of the Peoples Democratic Party (PDP) has dared the national leadership of the party, saying that inauguration of the state’s new executive committee is valid.

The national leadership had disowned the “purported inauguration of certain unknown persons as state officers of the party in Ogun State on Friday”, insisting that the PDP was yet to conduct any congress.

It advised all members of the public and appropriate institutions especially the Independent National Electoral Commission (INEC) to ignore any purported election or inauguration of officials.

Reacting, Bamgbose, in a rejoinder, said the party’s leadership does not understand that all politics is local and that “handing over the structures of the PDP to Ladi Adebutu is a recipe for the depletion of the commitment of members to the party in Ogun State and a defeat at the polls”.

He said the case which empowered him to conduct congresses for the election of party leaders in Ogun State had been resolved in Suit No. FHC/L/CS/636/2016, which reposed the powers in the party’s state executive committee.

Bamgbose recalled that in its judgment of 24th June 2016, the Federal High Court granted to the Plaintiff (Adebayo Dayo led PDP Exco), an order restraining the 2nd Defendant (PDP) and others, from conducting party affairs, including meetings, congresses and/or primaries except through new officers that emerge from congresses.

The chairman noted that the judgment was challenged at the Court of Appeal and the Supreme Court but was dismissed.

“Currently, the unassailable position is that congresses have been validly concluded by the outgone, judicially protected PDP OGSEC and new officers (that emerged under the terms of the orders in Suit No. FHC/L/CS/636/2016 set out above) have been validly inaugurated on the last day of the judicially recognized and specified tenure of the outgone leadership.

“My colleagues and I (following that inauguration) have now legally and validly taken over the running of the affairs of the Party in Ogun State.”

Bamgbose described the claim that the congresses that produced the new state executive contravened the interim injunction order made by Justice Inyang Ekwo, in suit No FCT/AB/CS/208/2020 on March 4, 2020.

According to him, Suit No. FHC/ABJ/CS/208/2020 was instituted by some national officers of the PDP to seek a review of the judgment which ordered that only the authentic state executive could conduct congresses or primaries