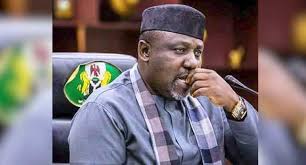 Okorocha appears before APC screening panel after his release

Okorocha is a Presidential aspirant and Senator representing Imo West

His showing up  at the screening had been a topic of political discourse in the country following his ordeal in the hands of the Economic and Financial Crimes Commission EFCC.

It will be recalled that the Federal High Court sitting in Abuja, had on Tuesday granted bail to Okorocha to the tune of N500million with one surety in like sum.

Trial Justice Inyang Ekwo okayed Okorocha’s released on bail, after he dismissed a counter-affidavit the Economic and Financial Crimes Commission, EFCC, filed against him.

EFCC had through its lawyer, Mr. Mr. Gbolahan latona, urged the court to allow the former governor to remain in custody, alleging that he posed a flight risk.

The prosecution maintained that Okorocha not only breached the administrative bail it earlier granted to him, but equally made himself inaccessible, a situation that led to his forceful arrest on May 24.

It told the court that the erstwhile governor, who is facing a 17-count money laundering charge, has the capacity to interfere with some of its proposed witnesses.

However, counsel to the defendant, Mr. Solomon Umoh, SAN, assured the court that his client would be available to face his trial.

The defence lawyer stressed that his client, being a responsible citizen and a presidential aspirant, would not conduct himself in any manner that would undermine the sanctity of the court.

He, therefore, begged the court to release him on bail on self recognizance or in the most liberal terms, noting that the charge against him contained bailable offences.

In his short ruling, trial Justice Ekwo said he was minded to grant bail to the defendant.

He ordered the defendant to produce one surety that must be a responsible citizen and owner of landed property in Abuja worth the bail sum.