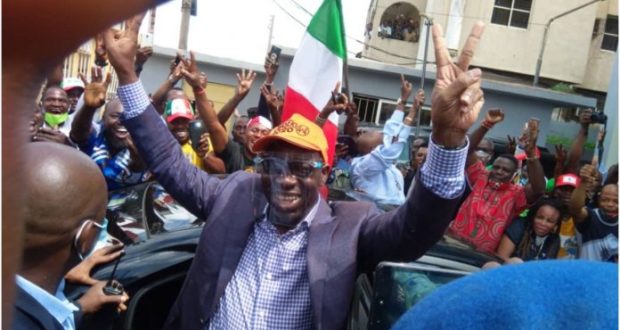 On the March Again: Obaseki to face Ize-Iyamu for the second time

Godwin Obaseki, governor of Edo state, has clinched the ticket of the Peoples Democratic Party (PDP) for the 2020 governorship election.

With this new development,  he will slug it out again with Ize-Iyamu of the All Progressive Congress.

He polled a total of 1,952 votes to win the party’s primary election which held in Benin on Thursday.

A total of 2,234 delegates from the 192 wards and 18 local government areas of the state participated in election with Obaseki as the only candidate on the ballot.

Three aspirants had backed out of the contest and endorsed him.

Announcing the result of the shadow election, Bala Mohammed, governor of Bauchi and chairman of the Edo primary election committee, declared Obaseki winner of the contest, saying he polled 90 percent of the available votes.

While reacting to his victory, Obaseki thanked all those who made it possible.

“I express my heartfelt gratitude to our great party, the @OfficialPDPNig, the leaders, delegates, members and all Edo people for the opportunity to fly the party’s flag in the forthcoming governorship election. God bless you all,” he said.

Obaseki was elected on the platform of the All Progressives Congress (APC) in 2016 and had indicated interest in seeking his reelection race on the party’s platform but he was disqualified.

Subsequently, he resigned his membership of the party and moved to PDP.

Ize-Iyamu, who is believed to having the backing of Adams Oshiomhole, a former national chairman of the party, clinched the APC ticket earlier in the week.

Previous: APC NEC Meeting: It was a rubber-stamped affair, debate not allowed- Source
Next: Buhari condoles with Oyo govt over Ajimobi’s death