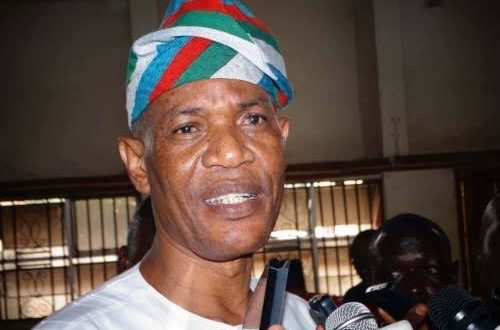 Crisis rocking the Unity Forum of the All Progressives Congress in Ondo State on Tuesday took a new twist with the emergence of Chief Olusola Oke as the group’s consensus candidate to contend with the incumbent governor, Oluwarotimi Akeredolu.

Governor Akeredolu has declared intention to seek a second term in office and recently said he would not enter into and reconciliation talks with members of the Unity Forum or any other aggrieved groups of the Ondo APC, The Nation reports.

The Unity Forum led by Alhaji Ali Olanusi has vowed to unseat Governor Akeredolu but members of the Forum cried foul play when Alhaji Olanusi unveiled Chief Oke as it consensus candidate.

Alhaji Olanusi in a press statement said Oke was picked in a report submitted by the Gubernatorial Candidate Selection Committee.

Those that however kicked against the emergence of Oke were Secretary of the forum, Dapo Adelegan, Professor Sola Ehindero, Deputy Senate Leader, Robert Ajayi Borofice have individually rejected the purported adoption of Oke.

Senator Borofice, who is the patron of the Unity Forum, rejected the emergence of Chief Oke and urged all aspirants to prepare for the primaries.

“Firstly, the political tendencies in Unity Forum could not agree on critical processes that could have led to adoption of consensus candidate. For instance, while some members opted for zoning, some members disagreed. Recently, aspirants participated in a zoning process and majority agreed that Ondo North senatorial district should produce the consensus candidate.

“Secondly, when the idea of consensus candidacy was mooted, the understanding was that all seven members of Gubernatorial Candidate Selection Committee must unanimously agree on a consensus candidate. That condition has not been met.

“Therefore, it is the consensus opinion of majority of leaders and members of Unity Forum in Ondo North senatorial district and other parts of Ondo State that Unity Forum is yet to present a consensus candidate”.

Professor Ehindero on his part described the announcement of Oke as fake news.

His words, “The attention of the duly elected secretary of the Screening Committee of the Unity Forum set up to select a consensus candidate for the APC in the next governorship elections has been drawn to a fake report from an unauthorised person.

“Hence, the report that has been fraudulently released by Ali Olanusi neither emanates from the accredited secretary’s office nor does it reflect the true deliberations and conclusion of the members of the screening Committee.

“Rather, the fake report is inspired,sponsored and programmed by known and disguised enemies of both the Unity Forum and the APC in the Ondo state and it is designed to tactically distract the attention and focus of our collective efforts”.

Adelegan disowned the endorsement of Oke saying the process was unacceptable.

“Our expectation is that by July 2020, an APC candidate will emerge from a formal Primaries and will move on to emerge as the governor of Ondo State in October of 2020 by God’s grace,” the media office said in an unsigned release.

However, the Unity Mandate Group accused Senator Borofice of playing politics of divide and rule to frustrate successes of the Unity Forum.

Coordinator of the group, Comrade Babatope Abisola said they were aware Senator Borofice was working to undermine the process of picking the consensus candidate before now.

According to the Comrade Abisola, “All along, Senator Borofice has been working underground to cause crisis in order for him to emerge as a neutral candidate to run. We are aware of his moves with the current deputy governor, to undermine us for them to run as candidates.

“They met with Mamman Daura I Abuja and ever since, they have been creating problems for us through unsuspecting persons in the Unity Forum. We stand by the mandate given to Chief Olusola Oke.

Previous: Buhari appoints long-term confidant, Ibrahim Gambari as his new Chief of Staff
Next: CUPP to Gambari: Use your experience to deliver Buhari from pit of incompetence