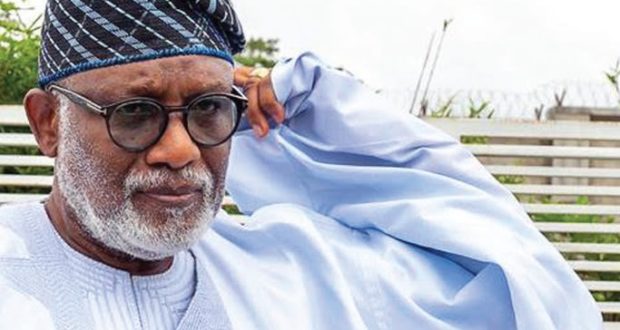 Ondo 2020: My kinsmen contesting against me are on selfish mission- Akeredolu

Ondo State Governor, Oluwarotimi Akeredolu, has said that he his not moved by Owo kinsmen plotting to unseat him

He said those plotting his removal are from both the ruling All Progressives Congress and the opposition Peoples Democratic Party in the October 10 governorship election.

More than 10 aspirants who have purchased nomination and expression of interest forms in the APC and the PDP are from Owo, hometown of Governor Akeredolu.

They have vowed to stop his re-election bid to enable them serve out his second term.

Akeredolu spoke when he visited the Olowo of Owo, Oba Ajibade Gbadegesin Ogunoye III and other traditional rulers in Ose and Owo Local Government Areas where he notified them of his re-election bid.

Akeredolu stated that the people of Owo would not take chances at the polls with unknown personalities.

The Ondo Governor said his kinsmen who are out to contest against him were on a selfish mission without having the interest of Owo people and the town at heart.

According to him, “After submitting the nomination form in Abuja, we are duty-bound to come here (Owo) first to get your blessing for the next journey.

By the grace of God, we will be successful. That is why we have to come here first. This is my root. I’m a bonafide and authentic son of Owo. So, I cannot forget my source.

“For me, it is not much of a problem that some Owo sons are also willing to contest the election because we already know what will be the outcome. I’m not scared.

I can’t be scared. I have passed that stage. As long as I have the support of the royal fathers and the people, that is enough for me because you are the one that will decide where Owo is going.

The Olowo of Owo, Oba Ajibade Gbadegesin Ogunoye said the people of Owo and Ose have gained dividends of good governance under the Akeredolu’s administration and would continue to reap it for another four years.

“We are solidly behind Oluwarotimi Akeredolu to run for second term in office. As you have all seen, he has ensured development across the state in all facets of life.

We have never had it good in Ondo State. I’m using this opportunity to appeal to all and sundry to support Akeredolu for a second term in office.