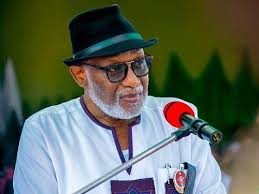 The credibility of  the election that broutght victory for Governor Rotimi Akeredolu of Info state was confirmed on Wednesday by a Federal High Court in FCT as the dismissed a suit challenging the validity of APC primary election which made Akeredolu emerged as its candidate.

Akeredolu, in the October 10 governorship pill, defeated Eyitayo Jegede of PDP and other candidates with  292, 830 votes.

Challenging the validity of APC primary election, one of its candidates, Nath Adojutelegan headed to the court on August 3, saying that the primary election that produced Akeredolu was not valid.

He added that the ruling party did not have and gubernatorial primary election on the scheduled days of July 17 and 20.

In his ruling, Justice Okon Abang, in his judgement, struck out the suit, saying that the court lacked jurisdiction to hear the matter.

The judge also ruled that the suit was  filed out of time.

In his judgement: “This suit is hereby dismissed for want of jurisdiction,” he said.

Previous: How I planned to change Nigeria-Jonathan
Next: Another House of Reps member decamps to APC