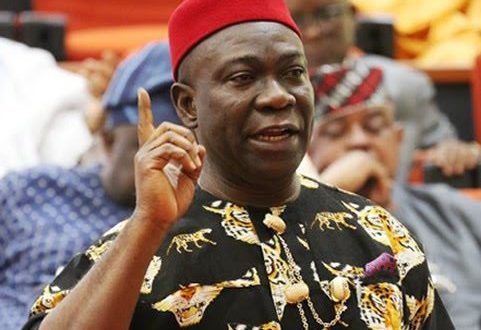 Ex-Deputy Senate President Ike Ekweremadu says the Peoples Democratic Party(PDP) will defeat the ruling All Progressives Congress at the October governorship election because the party is now united.

The Senator said PDP has resolved its differences especially as it related to protest that followed the alleged three-man adhoc delegates list.

Ekeremadu spoke to reporters in Akure when he monitored election of national delegates and one disabled person from 18 local government areas of the state.

The elected national delegates and disabled persons are to join the elected three-man delegate to participate in the PDP primary scheduled for next Wednesday.

Ekweremadu assured the Ondo PDP primary would hold as scheduled as the alleged doctored delegate list has been resolved.

READ ALSO: BREAKING: Gov Bello heads Ondo APC Primary Election Committee
According to him: “The issue of the three man delegates election has even resolved. There were some complaints and I am happy those complaints have been resolved. The July 22nd date for the PDP primaries in Ondo is still sacrosanct.

“You can see the delegate election was free and fair. It was well conducted and we are happy with the outcome. There was no violence. Nobody spotted any cheating.

“Part of our earlier problem was disunity in the party and there were some people who were disrupting the party issues and programme. I believed our people in the PDP in Ondo have learnt their lessons.

“They are now ready to get power back in the state. I am happy efforts have been made to keep our party in shape. We made our progress as a party in the state after losing power four years ago. You can see the difference.

“In the last general election, we had two Senators out of three, that means we have two third of the state under our control. That means the remaining part will come on board after the governorship election