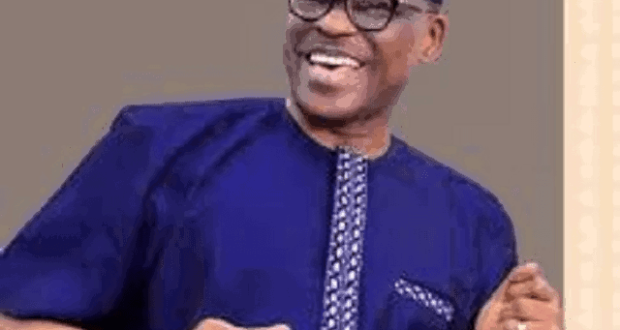 The governorship candidate of the Peoples Democratic Party, PDP, in Ondo State, Eyitayo Jegede SAN says his victory in the upcoming governorship election is 100 per cent sure.

Accordimg to him, his victory is a quit notice to the All Progressive Congress in the state.

Jegede said that “the end of ruling APC has come in the Ondo State.

He said this in his acceptance speech after he was declared the winner of the Wednesday governorship primary of his party by the chairman of the election committee, governor Ifeanyi Ugwuanyi at about 1233pm.

“ln accepting this candidacy, I Eyitayo Olayinka Jegede, “serve notice on the APC that for them the end has come” and solemnly assure you all that, with your collaboration and the special grace of God we shall record overwhelming victory in the governorship election coming up in October, and there will be accelerated progress in human development and socio-economic uplift throughout the state, without exception.

“By this victory, we serve a notice on the APC that for them, the end has come. By the grace of God with the assistance of the people and with the support of all the co-contestants, we will take over the government of Ondo state come October 2020.

“By the support of the people of the state and other party members, We will take over the government of Ondo state, come October 2020.”

Jegede dedicated his victory to all party members and other co-contestants and urged them to ensure they work together for the victory of the party.

“We are all winners in Ondo state and I dedicate this victory to people of Ondo and to my co aspirants who have shown sportsmanship.

“l commend the PDP family in Ondo State and the national leader of our great party. I must not fail to commend also members of the fourth estate of the realm and all the voters in Ondo state.

“By this vote of confidence in electing me as the Governorship candidate of the PDP for the elections of October 2020, I humbly accept this call to service but enjoin all of you to enter into my offer of partnership to work for victory at the Governorship Elections later this year. I cannot do it alone.

“I will be drawing from the support of my brothers (that is, co-contestants) in the task of liberating Ondo State from the shackles of the suffocating government of the Akeredolu-led APC government in Ondo State.

“We must ensure that we come together as one family, and harmonies ideas, resources and come together in love, to rescue Ondo State from its hiatus. My fellow contestants must be part of it, all party faithful must take ownership of this project regardless of today’s result.

“One thing must be taken into consideration in any contest, somebody must be declared the winner. But in the real sense of the word, all contestants for the top prize at the stake of this family contest are winners.

“They are winners in the sense that, while a poster boy hoists the shield, that same shield is eventually shared in unison, by the family members.

“I cannot but appreciate the conviction of purpose on display, with which all my co-contestants pursued the dream of becoming the candidate of our great party in Ondo State.

“Which is why I’m commending the participation of other aspirants and compatriots. This victory at the primary election is a collective one and the choice is of the family.

Dr Eddy Olafeso, Dr Bode Ayorinde, Banji Okunomo, Godday Erewa, Senator Boluwaji Kunlere and others have promised to work with him to bring back the lost glory of the state.

Dr Olafeso, however, said that their support will not be blanket adding that he has to engage them and put his cards on the table.

He said other aspirants are ready to support him for the upliftment and progress of the party and betterment of the people of the state.