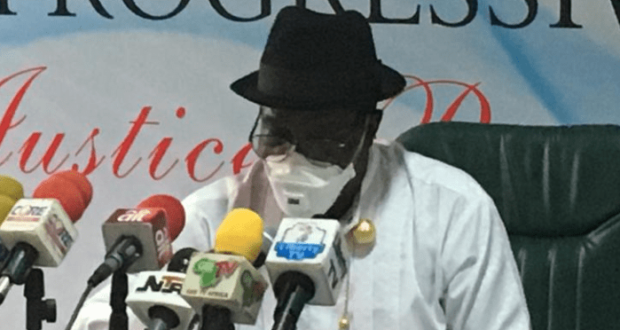 Ex-National Deputy Secretary of the All Progressives Congress (APC) Victor Gaidom on Monday said the only way out of the on-going leadership crisis in the party is convocation of National Executive Council (NEC).

Speaking with newsmen at the National Secretariat of the party, the embattled APC leader said it was high time the party was handed over to higher organ since the lingering issus are beyond the National Working Committee (NWC).

Asked what will be the way forward for the party, Gaidom said: “I have always insisted at the beginning of this crisis that the only way to resolve this issue is to surrender this party to a higher organ which is the best.

“And I am still insisting that the only way to get ourselves out of this mess is to convoke a NEC meeting. That is the only route out, I have the feeling that there is no other route to have peace and justice in this party except through a NEC meeting that has been my decision.

“There has to be a NEC meeting. NEC is the higher organ above the NWC, I do not see why they are afraid. You have to surrender this organ so that the right would be done and every other decision that has been taken by the leadership would be ratified by NEC.

“So if we do not have NEC meeting, it would be difficult to resolve this crisis,” Giadom insisted.

In another development, a group, Concerned APC Members stormed the secretariat, asking President Muhammad Buhari and the governors to urgently dissolve the National Working Committee (NWC).

The placard carrying party members complained that the NWC failed to manage the fortunes of the party.

Addressing newsmen the leader of the group, Comrade Okpokwu Ogenyi said: “This present National Working Committee has caused us to loose seven (7) States to the opposition. APC had twenty four (24) Governors before the present National Working Committee, today, we have eighteen (18) Governors. Just yesterday, the Deputy Governor of Ondo state has just left us and joined the opposition Peoples Democratic Party, PDP. Are we making progress or going backwardness?

“Today, we have four individuals who are members of the National Working Committee parading themselves as Acting National Chairmen of our Party, what a dance of shame! We are being ridicule on daily bases. The same Working Committee caused the Party not to feature candidates in Zamfara and Rivers states in the 2019 general elections.”

While calling on the highest decision making body, the National Executive Committee (NEC) to immediately call for a meeting, Ogenyi also demanded that the NWC should be dissolve.

“We also call on President Muhammadu Buhari whose integrity the Party is still surviving, Senator Ahmed Bola Tinubu the National Leader of our great Party, the President of the Senate, Senator Ahmed Lawan, Speaker of the House of Representatives, Rt. Hon. Femi Gbajablamila to support the dissolution of the present National Working Committee if we must move on as a party.

“We wish to unequivocally state that, any attempt to further keep this National Working Committee as the Working Committee of the Party is to send the APC into it’s early grave. We shall not continue to fold our arms and allow our collective efforts being ruined.”