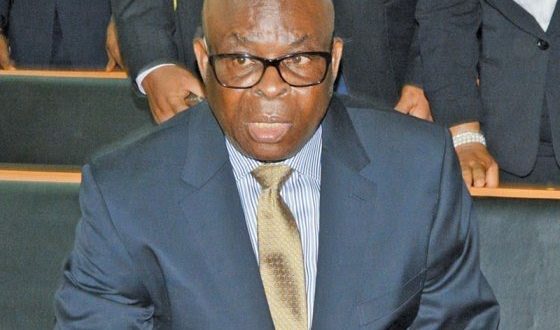 The Muslim Rights Concern, MURIC, lampooned the National Christian Elders Forum, NCEF for claiming that the conviction of suspended Chief Justice of Nigeria, CJN, Walter Onnoghen, was a Jihad against Christians.

It will be recalled that its Chairman, Solomon Asemota, NCEF had insisted that the development was a continuation of the “jihad that began with the overthrow of General Yakubu Gowon in 1975”.

However, MURIC has hurled the group over the coast, saying that they (NCEF) should allow peace to reign in Nigeria.

In a statement signed by its founder and Director, Professor Ishaq Akintola, on Tuesday, MURIC said: “National Christian Elders Forum (NCEF) has described the conviction of the former Chief Justice of Nigeria (CJN), Walter Onnoghen, by the Code of Conduct Tribunal (CCT) as part of the jihad against Christians in the country. NCEF made this allegation in a statement signed by its chairman, Chief Solomon Asemota (SAN) on Friday 19th April, 2019.

“We are still wondering about what happened to NCEF. This is a group of elders who, ceteris paribus, should know better and, consequently, contribute positively to the national discuss. But we are perturbed by its pedestrian outbursts.

“We find it hard to believe that General Yakubu Gowon in particular, a former Head of State, will belong to a group that stands logic on its head and twists the facts of history. How did the overthrow of Gowon in 1975 constitute a jihad? This is a most irrational claim.

“Our people say when a child rejects evening pounded yam, his parents will narrate to him the story of his mother’s marriage. But what do we say about elders who falsify facts? We must beckon on historians to bail us out.

“For the avoidance of doubts, Gowon was toppled on 29 July, 1975 for reneging on his promise to end military rule in 1976. The spate of protests against his U-turn especially by university students showed how unpopular his procrastination had become. It also led to the closing of some higher institutions.

“Gowon had fallen in love with power and was not ready to leave even after spending ten years (1966 – 1975). Nigerians may be passive on misrule and parliamentary idiosyncracies but they have never been silent over tenure elongation. The inglorious third term agenda is a good example.

“Gowon got his fingers burnt for seeking to tow the path of sit-tight African rulers like Hosni Mubarak of Egypt who spent 30 years in office (1981 – 2011) and Muammar Gaddafi of Libya who spent 42 years (1969 – 2011). It is a great disservice to history for NCEF to seek to distort the events which led to the toppling of Gowon.

“As it turned out, many of the drammatis personae in the anti-Gowon post-coup events were Christians. Joe Namvan Garba was made commander of the Elite Guards Brigade, Mathew Obasanjo was named chief of staff at supreme headquarters, Theophilus Y. Danjuma became chief of army staff, Commodore Michael Adelanwa, chief of naval staff and John Issa Duku, chief of air staff. The last time we checked, Joe, Mathew, Theophilus, Michael and John were all Christian names. So, was it Joe Garba or Mathew Obasanjo who was pushing Buhari’s jihad agenda?

“Again, NCEF claimed that Buhari overthrew Shagari in 1983 and retired Justice Taslim Elias, a Muslim, to Islamise Nigeria by replacing a Federal Republic with a Sultanate. What sense does this make for crying out loud? Both Shagari and Taslim Elias were Muslims and why would Buhari remove them if he intended to Islamise the country?

“The most arbitrary claim of the group has to do with the removal of the suspended CJN. NCEF claimed the removal of Onnoghen is a continuation of stealth jihad which began with the coup against Gowon. It is as ludicrous as it is infantile.

“Perhaps NCEF is also suggesting that the National Judicial Council (NJC) which found Onnoghen guilty of the charges leveled against him is engaging in jihad. When will NCEF stop seeing religion in every big or little thing? Why should the Onnoghen issue be turned into religious blackmail?

“Members of NCEF need to be circumspect and careful in their utterances. If we are not careful, reckless statements like this could prepare grounds for genocide. We need to take lessons from Rwanda and we may not have a Kigame to heal the wounds that are direct consequences of such conflict.

“Muslims did not call it a Christian crusade when ex-President Jonathan removed the CBN governor (now Emir of Kano) unceremoniously. Neither did they start appealing to religious sentiment when the same Jonathan sacked Justice Salami.

“Again, for want of anything else to say, NCEF blamed the problems of Nigeria on the amalgamation of the Northern and Southern regions. We must ask NCEF who should be blamed for the amalgamation. Was it done by the Sultanate or the Fulanis? The British colonial masters amalgamated the North and South. NCEF should direct its protest letter to No. 10, Downing Street.

“Elders are expected to possess the wisdom to solve problems, not the flair for rabble-rousing. It is high time NCEF accepted this common destiny and settled down. We are bewildered that elders of a religious group whose scripture is filled with wise sermons have elected to behave contrary to the teachings. NCEF members are mere hearers of the word of God, not doers (James 1:23).

“It is didactic to note that the umbrella body of all Nigerian Christians, the Christian Association of Nigeria (CAN) has already disowned NCEF. That alone is enough to compel us to ignore the group but for the need to put records straight.

“That development becomes more instructive when considered against the background of the visit of Paul and Barnabas to the elders in Jerusalem for consultation ((Acts 15:2). Instead of consulting NCEF, CAN dissociates itself from the Northern elders. It speaks volumes. Impertinence sometimes creates distance.

“Was this not on Peter’s mind when he advised church elders “not domineering over those in your charge, but being examples to the flock”? (I Peter 5:3). Members of the NCEF should not tarry until Nigerians start sending anti-senility drugs to them before they take CAN’s advice.

“On a final note, we affirm that what Nigeria needs now is a peaceful environment. There can be no meaningful development without peace and stability. Let us stop heating the polity. Nigerian Muslims have no Islamisation agenda. We are willing to peacefully coexist with both Christians and traditionalists as neighbours and on equal terms.