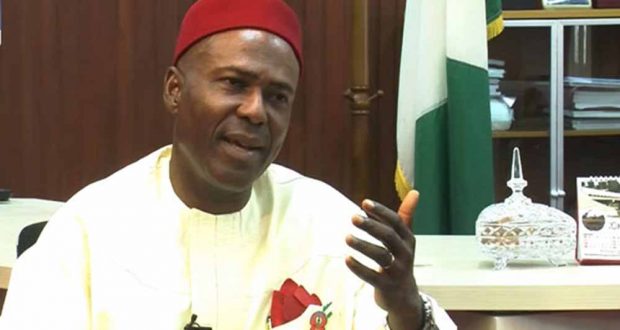 Onu, Elechi lead others to welcome back aggrieved APC members in Ebonyi

Ebonyi state chapter of All Progressives Congress (APC), seems to be growing in number.

This comes as some aggrieved members return to the fold on Monday in Abakaliki.

The Minister for Science and Technology, Ogbonnaya Onu, Martin Elechi, former governor of Ebonyi, in the company of Acting Chairman of the party in the state,  Eze Nwachukwu and many more welcomed the returnees.

Onu said that the reconciliation was necessary as the party need to be strong and united ahead of the 2019 general elections.

He said that the faction, comprising 13 aggrieved members of the State Working Committee (SWC) were given unconditional welcome back and urged the mainstream APC members to receive them in open arms.

“I appeal to our returning aggrieved members to eschew any form of anti-party activities or any activity likely to generate another crisis in the party.”

In his own remark, Elechi, immediate past governor of Ebonyi, enjoined them to work for success of the party in the state.

He warned them against indulging in acts that could derail the progress of the party but to commit their energies in building the party.

Nwachukwu, described the reconciliation meeting as an epoch making event, explaining that the move would further strengthen the party.

He said that the reconciliation with the aggrieved APC members would reinvigorate the party to achieve better political results.

Meanwhile, Mike Okoro, Chairman of the APC Reconciliation Committee, described the event as historic and expressed joy over the reconciliation and return of the 13 SWC members.

He urged the mainstream APC members to put aside the ugly incidence and embrace the returnees in the spirit of party brotherhood.

He said that true reconciliation was needed to build more virile and stronger APC and assured that the group would work for the victory of the party in the 2019 general elections.

Ebonyi state APC after the 2015 general elections was embroiled in leadership crisis leading to the suspension of the state party chairman, Ben Nwaobasi.

Previous: NOA to electorate: Ignore ‘vote and die’ threat by IPoB in Anambra
Next: Buhari and Nigerians wish you quick recovery, SGF tells Ekwueme in London