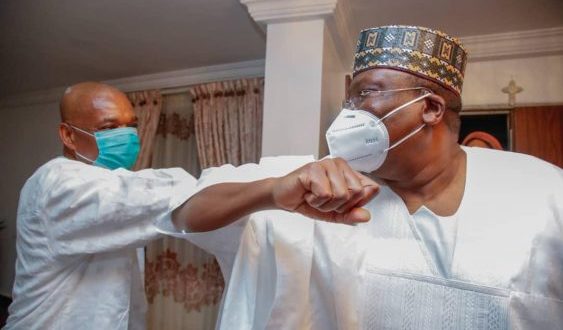 Senator Orji Uzor Kalu, who has just been freed from prison has resumed normal legislative duties at the National Assembly complex on Tuesday.

On entering the NASS chambere, he changed pleasantries with his colleagues and acknowledged greetings from legislative staff and security operatives.

Speaking with journalists on arrival at the entrance to the Senate chamber, Kalu described his experience as a good one.

He said, “I just want to thank God for everything that has happened. It is the will of God. I want to urge Nigerians to keep hope alive.”

Kalu was released after over six months of incarceration at the Kuje Correctional Centre.

The Senator and others, were in December last year, convicted and sentenced for N7.1bn fraud.

Justice Mohammed Idris, who was elevated to the Court of Appeal bench, had returned to the Federal High Court in Lagos to complete the case, which started in 2007.

However, the Supreme Court, in a unanimous decision by a seven-member panel led by Justice Amina Augie, on May 8 this year, held that the Federal High Court in Lagos acted without jurisdiction when it convicted Kalu, his firm, Slok Nigeria Limited and a former Director of Finance in Abia State, Jones Udeogu, in December last year.

The verdict of the apex court was not categorical on whether Kalu should be released from prison or not and his lawyers decided to approach a Federal High Court in Lagos for the interpretation of the judgment.

The Federal High Court led Justice Mohammed Liman before whom the applicant’s motion was pending, however, granted the prayer of the applicant, and ordered the release of Kalu, from the Kuje prison custody on Tuesday

Previous: Gbajabiamila to Orji Kalu: Going to prison is a badge of honour for a politician
Next: Ondo 2020: I am not afraid of any mode of primary in APC- Akeredolu