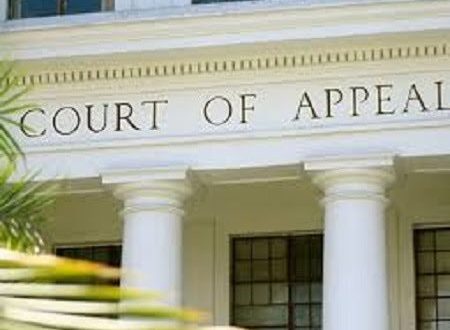 The Court of Appeal in Abuja has stayed the execution of the March 4, 2020 orders of a High Court of the Federal Capital Territory (FCT) suspending Adams Oshiomhole the National Chairman of the All Progressives Party (APC).

In a ruling on Monday evening, a three-man panel of the appellate court, led by Justice Abubakar Datti Yahaha was unanimous in granting the reliefs contained in an ex-parte motion argued by the lead lawyer to Oshiomhole and the APC, Wole Olanipekun (SAN).

The court also restrained the respondents to the appeal marked CA/A/188/2020 and their agents from taking any further steps to give effect to the orders contained in the March 4, 2020 interlocutory ruling by Justice Danladi Senchi of the High Court of the Federal Capital Territory (FCT) in Jabi pending the determination of a motion on notice filed by Oshiomhole and the APC.

Olanipekun had, while arguing the ex-parte application, noted that time was of the essence and that the urgent intervention of the court was necessary to prevent an irreparable damage.

He added that since the March 4, 2020 ruling by “there has been a state of confusion in the party (APC).

“There can not be two pilots in an aircraft at the same time,” he said and argued that the court was at liberty to take judicial notice of happenings around it.

Olanipekun told the court that his clients filed two appeals against the two rulings delivered on March 4, 2020 by Justice Senchi.

He said his clients have compiled records in relation to both appeals, marked: CA/A/187/2020 and CA/A/188/2020, along with a motion on notice each for order of stay of execution.

He added that his clients also filed a» motion ex-parte in respect of the appeal marked: CA/A/188/2020, and have served all the respondents accordingly, but without the ex-part motion.

He proceeded to motion the motion ex-parte which the court granted in a brief ruling.

Justice Yahaya, who read the lead ruling, said: “We have considered the application and have looked closely at the affidavit in support and the exhibits.

“We are of the view that an emergency picture has been painted, so that an intervention by this court at this time, and in this process, is warranted.

“There is the information that a National Executive Council (NEC) meeting of the second applicant (APC) is to be held tomorrow. and, following the ruling of the FHC High Court under consideration, the 1st applicant (Oshiomhole) will not be able to attend.

“If this happens, then there is no assurance that any status quo ante bellum would be maintained.

“The status quo can only be maintained. in this circumstances if there is a stay of the execution of the ruling of the FCT High Court.

“In this vein therefore, we find merit in the application. We hereby order a stay of execution of the ruling of the FHC High Court in suit No: FCT/FC/CV/17/2020 delivered on the 4(h of March 2020 pending the determination of the motion on notice.

“As a coronary, we also hereby, givean order of injunction, restraining the respondents themselves, their agents, privies and officers, jointly and severally from proceeding to take any other steps to give effect to the said ruling, pending the determination of the motion on notice.

“Since the appellants have transmitted records and have filed a brief, they have demonstrated interest in prosecuting the appeal. The appeal is given accelerated hearing”

“Having said all these, we implore political parties to try to resolve their deferences. amicably without the necessity. of involving the court at all times,” Justice Yahaya said.

Other members of the panel – Justices Joseph Oyewole and Mohammed Mustapha – agreed with the lead ruling.

Oshiomhole and his supporters,who arrived the court before 8am on Monday were earlier treated to a strange development when, at about 12noon, after they had for about four hours, an official of the court suddenly announced that hearing in the appeals, earlier scheduled for March 16, 2020 has been put off to a date to be communicated to parties.

Parties in the appeals had besieged the court on Monday in response to hearing notices served on them last week.

But, at the commencement of the court’s proceedings a panel of three Justices led by Justice Stephen Adah sat to hear other cases.

The panel later rose, with a promise that another panel will be reconstituted to hear Oshiomole’s appeal.

Parties were however, taken aback when, rather than having a new panel, a female official of the court announced to a packed courtroom that the court has elected to hear Oshiomole’s appeal on a later date to be communicated to parties later.

A bewildered Oshiomhole consulted briefly with his team of lawyers and later headed out of the court premises, with his supporters.

He told reporters that since the court said it was not ready, he would prefer to wait to let the court determine the case.

The court however reconvened at 4pm, to hear the motion ex-parte, with Justice Yahaya explaining they members of the panel came in hurriedly from outside the FCT, where they were earlier engaged..