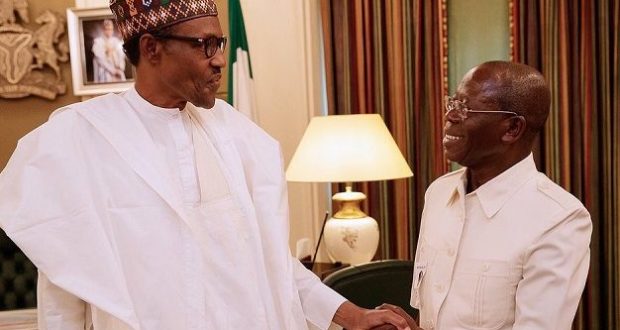 The National Chairman of the All Progressives Congress (APC), Comrade Adams Oshiomhole, has accused the Peoples Democratic Party (PDP) planting the idea of third term agenda by President Muhammadu Buhari in the sub-conscious of most Nigerians to further confuse the political space.

Oshiomhole stated this when he addressed State House correspondents after the end of a closed door meeting with President Buhari at the Presidential Villa, Abuja, on Thursday.

President Buhari had on Wednesday in a letter to Nigerians to mark the beginning of 2020 reiterated his intention not to contest the 2023 presidential elections.

The Nigerian leader, however, expressed determination to help strengthen the electoral process both in Nigeria and across Economic Community of West African States (ECOWAS).

The PDP had on Wednesday criticised President Buhari over his New Year message and frowned at his pronouncement not to participate in future elections in the country.

The party, in a statement by its National Publicity Secretary, Kola Ologbondiyan, said the president and his party (APC), would have no other option than to exit office at the end of his tenure in 2023.

However, the APC chairman said: “I am surprised to see that there are people who begin to wonder why should the President reassure Nigerians that he is not going to do Third Term in office because Third Term was planted by PDP.

“You can recall that President Yar’Adua unfortunately has since joined his ancestors, and President Jonathan did six years and so by the special grace of God, this President (Buhari) whom we pray will do his eight years complete in line with the provision of the constitution.

“And because there is a level of idleness within a section of the political class people can sponsor all kinds of publications and to give doubt whether or not the President is planning to stay longer.

“And I think it is his decision that at every interval he needs to remind Nigerians that he is not about to do what a PDP President did. For me it is necessary and in any case it costs us nothing to reassure us that `I am leaving.’’

On those calling on him to resign as APC national chairman, Oshiohmole quoted a proverb that says: “It’s a tree that bears fruits that attracts stone.”

He added that, “you hardly see people throwing stone at a dry tree palm tree. But if you see a mango tree when it is its season, people throw stones at it when passing.

“I think that is my lot but my report card is also very very clear. You my comrades (media) should also help in interrogating the process, how a performance of a National Working Committee of a political part should be evaluated?

“But I think the evaluation should start mostly, how many elections did you lose, or lost.

“Last week we saw the British Labour Party Leader that he accepts responsibility for the crushing defeat that the Labour Party suffered under his leadership, he offered in principle having accept responsibility, will not lead the party in the next election, so he is going to resign because under his leadership the party was rejected by the British electorate.

“In my own case, and I challenge anyone to say that any of these things are not true.

“We the executive members of the party were sworn in on the June 3, 2018, at about 6 p.m. Two weeks later, we went to Ekiti to contest election against a PDP incumbent governor Fayose and we won. Kayode Fayemi today is the governor of that state.

“Few months later, we went to Osun State, we contested a by-election, we won and we had the Osun State governor elected for his first term.

“Then we went for the national elections, you know all the tensions in the country at the time.

“So under my leadership this President has more votes than the first runner-up, we would like to claim credit for that because if it went the other way so we would be crucified,’’ he said.