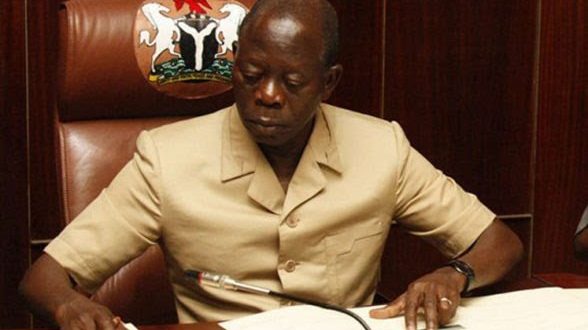 The Factional Publicity Secretary of the All Progressives Congress (APC), in Edo, Joseph Osagiede, on Monday accused the National Chairman of APC, Mr Adams Oshiomhole, of being responsible for the violence in the state.

However, Oshiomhole in a reaction distanced himself from the allegation and blamed the Edo government and its governor, Mr Obaseki for fomenting trouble in the state.

Osagiede in a news conference in Benin said that the national chairman was pushing Edo to the precipice with the intent of creating the impression that law has broken down so that a state of emergency could be declared.

“The National Chairman orchestrated the state assembly primaries to fix his stooge so as to impeach governor.

“When he failed, he masterminded the crisis, housing 14 lawmakers-elect in Abuja who should rather be in Edo representing their people.

“Recently his lieutenants have resorted to the use of explosives and dangerous weapons in some parts of the state and endangering the lives of law abiding citizens.

“We call on the presidency and the Inspector-General of police to call the National Chairman to order so that violence does not erode the good legacies that the APC has built over the years,’’ he said.

Reacting to the allegations on behalf of the National Chairman, Mr Samson Osagie, a chieftain of the APC accused the state government of putting every blame on Oshiomhole.

“The truth of the matter is that I do not know how they decided to put logic on its head.

“The governor who is responsible for the security of lives and property has decided to blame other persons rather than himself.

“He has threatened violence over time and the state government is moving around to accuse those who are being attacked of being responsible for the attacks.

“Suffice it to say that Oshiomhole or those supporting him in every of their public statements have not issued threats,’’ he said.

According to him, the state government and the governor are the ones responsible for the attacks and the public is aware of this.

Previous: Just in: Edo State Govt calls for arrest, prosecution of Oshiomhole
Next: Call for impeachment: Abaribe spoke the minds of Nigerians- Analyst