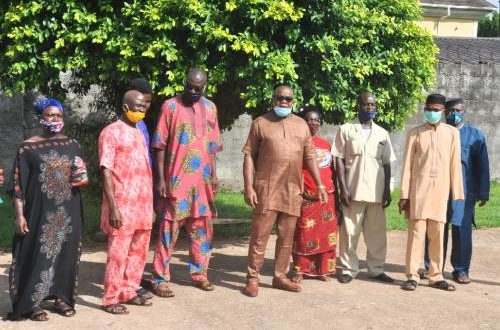 Chairman of the All Progressives Congress in Etsako Ward 10, Edo State, Mr Oshawo Stephen, has debunked the news making the rounds that the suspension placed on Adams Oshiomhole has been lifted.

He Insisted that the ward executives stand by their suspension of the erstwhile National Chairman of the APC.

In a statement, Stephen said the ward executives, who were elected into office in 2018, remain intact and had not been displaced by anybody, describing the claims of the lifting of the suspension as a charade.

He said, “The suspension of Comrade Adams Oshiomhole by the ward executives remains valid. The statements to the contrary in the media are false and should be disregarded. We stand by our decision and have no reservation on the action as it is in the best interest of the party.

“The ward executives as well as our counterparts at the Etsako West Local Government level stand by the suspension of Comrade Oshiomhole for his divisive role in the crisis rocking the APC in Edo State.”

Chairman of the APC in Etsako West LGA, Ezolomhe Rabiat, also affirmed that the local council executives were still members of the party in the state and stand by the suspension of Oshiomhole.

Previous: Edo APC Primaries: No going back on June 22 fixed date- Spokesman
Next: I will emerge new Governor of Edo, Obaseki’s exit good for APC- Ize-Iyamu