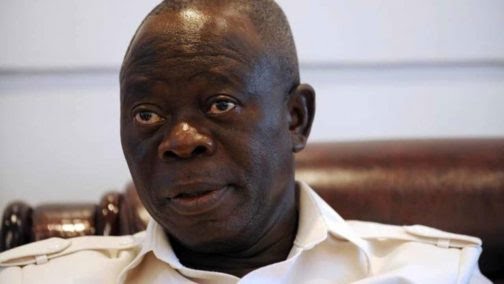 The National Chairman of the All Progressives Congress, APC, Comrade Adams Oshiomhole has attacked opposition party for saying that election that gave victory to Senator Hope Uzodinma was more than validly registered votes

He described the statement as “an assumption which is not supported by fact.”

According to him, what Nigerians should rather worry about is to see amendment to laws that will ensure candidate who was rejected by the electorate does not find his way to the government house, aided by the court.

The APC National Chairman pointed out that lawyers to the applicants failed to provide evidence that the votes declared for Uzodinma was more than the registered votes in court.

Oshiomhole spoke to State House Correspondents after his brief visit to President Muhammadu Buhari on Tuesday.

The former Edo State Governor said, “You have made an assumption, which is not supported by fact, mainly by the speculation and the roadside talks by some elements in PDP, suggesting that there was over-voting if you add the votes that were ignored.

“Those are not proven because if they were, it was up to their counsel to provide evidence that it was more than the registered votes, not to go and say it on television.

“Matters before the court are canvassed before the court. Issues not raised in the court cannot be raised on television. I assume your question is informed by those uninformed, self-serving speculations. They don’t merit my reaction.

“What I think that we must discuss as a people, which concerns you and I as Nigerians, who believe in democracy, is that the law should be amended, such that no matter what happens, when people have voted, they cannot be dismissed as ‘April Fool’.

“You can’t say that although you have voted, and at the time you did so, you voted in good faith, believing that the candidates before you on parade were competent to be so paraded and as a Nigerian voter you voted, then at some other time some other person tells you that the man you voted for is not qualified either because of error in his name or because of chieftaincy title or whatever reason as to lead to disqualification, that cannot be the reason why a man who was rejected by the electorate would be imposed on the electorate.

“Courts should not impose. If the court finds out that the preferred candidate did not win, for me the only democratic option, legal option will be to repeat the exercise.

“Nothing should empower the court to impose a man rejected by the people, on the people. That goes to the heart of democracy and it destroys the fabric of our democratic process.

“So in amending the Electoral Act, one of the things I’ll like to see the parliament do and we are going to make a representation, is that in the unlikely event that the people have voted in good faith, for a candidate that was validly put before them by INEC, and looking at the faces of the candidates they opted for a particular one, if anybody has any issue with that one that the people prefer and has won, the court cannot impose the person that was rejected.

“The very best the court can do is to order that the exercise be repeated because in a democracy, nobody, other than the people, can choose who governs them, not the courts. For me this is fundamental when it comes to who actually won the election.

“The issue of whether Muhammed, Muhammadu or Momoh, whether they are one and the same person is too technical for the real electorate to bother about, when there are no two people parading themselves as to suggest whether there’s a case of impersonation. This system should not be determined by technicalities.

“At the heart of every judicial pronouncement on elections must be who actually won the majority of lawful votes and if for any reason they found themselves compelled to nullify that person, they should not be empowered to award governorship to a man rejected by the electorate, otherwise, what is democracy about?

“Now, the man in Bayelsa is going to govern a state that did not mandate him, purely on technical grounds. Nations are not governed by technicalities, they are governed by people popularly elected. That is the democracy we chose. This is not partisan issue at all, it’s about democracy. Court cannot impose losers as winners, for me it’s too fundamental.

“They must take advantage of the amendment to make it impossible for anyone to be so imposed on the basis of technicalities.

“We can do a rerun 10 times, but only the man popularly elected can govern, otherwise, in a democracy, as they say, the people deserve the government that they have. In this case you are going to have a government didn’t vote for superintending over your resources and presiding over your life. I think that is the kind of amendment I’ll like to see.

“It is not true that the votes Uzodinma were more than the accredited votes, those are PDP propaganda.”