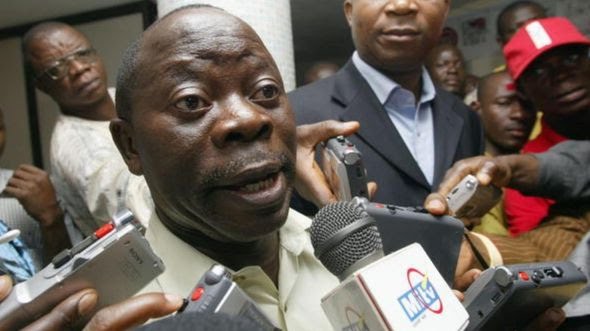 Oshiomhole to Giadom: Your claim of chairmanship is against common sense

According to the embattled Chairman, his claim id against common sense, noting that tthe party is ruled by its guidelines.

Speaking on a Channels Television programme, he said the Court of Appeal, did not suspend the National Working Committee (NWC) from functioning and the constitution of the party states clearly who acts as the chairman in his absence.

He said: “My advice to my brother, Victor, is about common sense – in the absence of the Chairman, there is nothing in our rules and the court can only interpret the rules of the party and the Constitution of Nigeria. It serves to common sense that if the chairman is absent, it should be the deputy; in the absence of the deputy, it is the vice-chairman. How does the deputy secretary come in? As we speak, we have a secretary in the office. People should put God first, our party’s interest second, and our democracy deep in their hearts and not trying to use any externality to destabilise it.

“Everybody knows that we ought to resolve issues in line with the party’s rule. How can a deputy national secretary, assuming he was still one, claim to be the chairman?”

Oshiomhole said he accepted the judgment suspending him from office in good faith and will be meeting his lawyers on the next line of action.

He said: “It is not for you to choose whether to obey or not. I accepted the judgment in good faith. I am a product of the judiciary and I always tell people that if I am not a convict today, it is the courtesy of a courageous Bench and a very resourceful Bar. All my life has been of a struggle, people have always oppressed and harassed me and the court has always come to my aid even my being governor was courtesy of the court. My lawyers will advise me on the next line of action after studying the judgment. I thank their lordship for the judgment.”

According to him, there is no doubt about the resignation of the Edo State Governor Godwin Obaseki.

“Until 7pm yesterday, I remained the chairman of the APC. Before then, the governor of Edo State had voluntarily resigned his membership. That resignation has since been accepted. The screening has been completed and all that was left was done today by the members of NWC.

“We are 21 members in the NWC. Since the court has upheld what they described as suspension by my ward, I did not attend the meeting in obedience to the Court of Appeal but it did not suspend the functioning of the NWC and the constitution of the party states clearly who acts as the Chairman in the absence of the Chairman. The NWC met and about 16 out of 20 took some decisions to ensure all attempts to scuttle the primary election in Edo was not successful and went ahead to appoint those that will conduct the election,” he